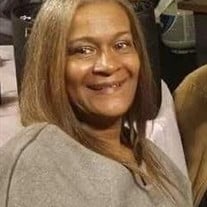 Janet McGee, 52, of Mt. Vernon, passed away Saturday, January 15, 2022 at her home. She was born May 23, 1969 in Milwaukee, WI, the daughter of Lena Bell McGee. She is survived by her two sons: Roosevelt “Phil” McGee of Georgia and Mario Roby of Georgia; a special daughter: Kisha Scott of Centralia; four grandchildren: Damontreal, Mya, Major and Malia; 13 brothers and sisters: Paul McGee and wife Barbara of Wisconsin, Dianne Pester of Kansas City, Missouri, Freda Stewart Lasley of Centralia, Dennis McGee of Centralia, Anthonnette Strowder-Evans and husband Edward of Centralia, Clarice McGee of Milwaukee, Wisconsin, Anthony McGee and wife Ann of Centralia, Charles McGee and wife Bonnie of Centralia, Joan Webster of Paducah, Kentucky, Joyce King of Centralia, Stephon Wilson of Chicago, Illinois, Ella Mae McGee of Milwaukee, Wisconsin, Linda Webster of Centralia and Diane Grooms of Indianapolis; an aunt: Felicia McGee of Mt. Vernon; an uncle: Hamp Webster and wife Marla of Centralia; special nieces: Malena McGee (Kenyatto) of Milwaukee, WI, LaQuita Ward of Milwaukee, WI, and Effie McGee of Centralia; special nephews: Cornell Fletcher of Centralia, Calvin Brown of Centralia, Demetrice “Meechie” Lockett of Centralia, and James “Daddy Man” Strowder of Centralia; and several other nieces, nephews, cousins and friends. She was preceded in death by her mother: Lena Bell McGee, grandparents: Booker and Emma McGee; three brothers: James Mosley McGee, Roy McGee, and William Earl McGee, three sisters: JoAnn McGee, Helen McGee and Robin McGee, and an aunt: Maybell Pulley, a nephew: T.J. “Bobie” Howard, and a nephew-in-law: Cinjinio Ward. Janet worked as a CNA in Georgia for many years. She was a wonderful caregiver. She enjoyed cooking and listening to music. Janet loved socializing with her family and friends. She cherished the time she spent with her children, grandchildren, family and friends. Funeral Services for Janet McGee will be held Sunday, January 23, 2022 at 11:00 AM at the Sutherland-Garnier Funeral Home in Centralia. Burial will follow at Elmwood Cemetery in Centralia. Visitation will be held Sunday from 10:00 AM until the time of service at the funeral home. In lieu of flowers, memorial donations may be made to her grandchildren and/or Relay for Life Centralia and will be accepted at the Sutherland-Garnier Funeral Home at 235 North Sycamore Street Centralia, Illinois 62801, (618)532-3523, who is honored to be of service to the McGee Family. Online condolences may be made to the family by visiting www.sutherlandfuneralhome.com and the Sutherland-Garnier Funeral Home Facebook Page.

The family of Janet McGee created this Life Tributes page to make it easy to share your memories.

Send flowers to the McGee family.