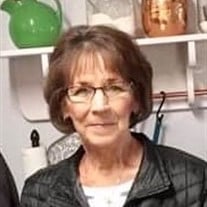 Janet Rae Pugh Lindblad, a native of Centralia, passed away Friday, June 18, 2021 at 5:27 A.M. Janet was born on February 7, 1952 in Centralia, Illinois, the daughter of Shirley Manhart Beebe and Lowell Pugh. Janet was married to David Lindblad, they married in July 2000 and resided just outside of Freeburg, Illinois. David passed away Friday, June 18, 2021 at 4:00 A.M. She was previously married to Robert Kahrhoff. He survives in Centralia. Janet is survived by her five children: Jennifer Gross (with husband Lee) of Central City, Jason McKinney (with wife Sonya) of Centralia, Jared Kahrhoff of Centralia, Jacob Kahrhoff of Centralia, and Kendall Lindblad of Freeburg. She is also survived by her sister, Jeananne Altenbaumer (with husband Leslie) of Central City, brother-in-law: Jeff Lindblad (with wife Diane) and sister-in-law: Claudia Johnson. Janet had five grandchildren: Mitchell Gross (with fiancé Kaycee Gambill), Alisia Kahrhoff, Lillian McKinney, Hannah McKinney, and Makenah Kahrhoff, as well as three great-grandchildren: Autumn Gross, Griffin Gross, and Emerie Kahrhoff. Surviving nephews and a niece: Adam, Aaron, and Ann Altenbaumer. Janet graduated from Sandoval High School. She held several positions in her 26 year career at Warren G. Murray Developmental Center before retiring in 2011. She last served as a third-shift area supervisor. She loved the individuals residing at Murray like her own children. She continued contact with some even after retirement. Janet had previously worked at Miss Elaine’s Dress Factory as a secretary. Janet loved to bake. She always made sure all who attended Christmas dinner had their favorite cookies and more to take home. She also loved working in her yard and posting pictures of all of her beautiful flowers. Janet loved going to Cardinal games and watching them on television, although she turned the volume down when listening to Tim McGyer. She enjoyed fishing with David and Kendall, but especially loved spending time with her friends and family. In addition to her parents, she was preceded in death by her niece: Amy Dillion. Janet fought a long, hard, and courageous battle against cancer. Her family prays for anyone else fighting the same battle. She loved to watch her granddaughters: Lily and Hannah play basketball and softball. A Celebration of Life Service will be held Tuesday, June 22, 2021 at 7:00 PM at the Sutherland-Garnier Funeral Home in Centralia with Lee Gross officiating. Visitation will be held Tuesday, June 22, 2021 from 5:00 PM to 7:00 PM at the funeral home. A Private Family Burial will be held at a later date in Freeburg, Illinois. In lieu of flowers, memorial donations may be made to the Murray Parents Association and will be accepted at the Sutherland-Garnier Funeral Home at 235 North Sycamore Street Centralia, Illinois 62801, (618)532-3523, who is honored to be of service to the Lindblad Family. Online condolences may be made to the family by visiting www.sutherlandfuneralhome.com and the Sutherland-Garnier Funeral Home Facebook Page

The family of Janet Lindblad created this Life Tributes page to make it easy to share your memories.

Send flowers to the Lindblad family.