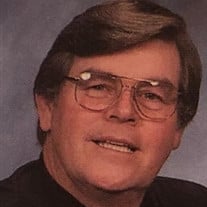 James David White was born April 14, 1948, at Missouri Baptist Hospital in St. Louis, Missouri, and entered into Eternal Rest on Friday, October 2, 2020, at his home. James was born to parents Eunice A. White (daughter of Evelyn and Lawrence Correll) and James E. White (son of Ida and David White). He was preceded in death by both parents, a sister: Sharon Wallweber, a brother: Jerry White, and a brother-in-law: William Wallweber. Jim grew up in the St. Louis metropolitan area and spent his summers with his grandparents on their farm in rural Woodlawn, Illinois. He was a graduate of Grover Cleveland High School in St. Louis, Missouri and Union University in Jackson, Tennessee, with a degree in Psychology. He was an ordained Southern Baptist Minister. Jim served as pastor of two churches before he was employed as a locomotive engineer with the former Missouri Pacific Railroad, now known as the Union Pacific Railroad. In addition to his railroad career, he also worked for Feig Sign Company in Centralia, Illinois and as a Case Worker for LCFS and CSS in Mt. Vernon, Illinois, under their respective contracts with the Illinois Department of Children and Family Services. Jim and Susan D. Forehand (Feig) were married on November 1, 1997 and she survives him in Centralia. He is also survived by one brother: Warren White and wife Teresa, a sister-in-law: Sandy White, a brother-in-law: Clete Feig and wife Laura, a sister-in-law: Carol Flanigan, a brother-in-law: Tom Feig and wife Jan, a brother-in-law: Bob Feig and wife April, and many nieces, nephews, and cousins. Jim’s love for reading and preaching God’s word was evident to anyone who knew him. For many years Jim would do pulpit supply at local churches in the area and conducted a few weddings and many funeral services for family members and friends, which he always felt honored to do. Jim started volunteering at the CCBA Food Pantry approximately five or six years ago. He was elected to serve as Vice-Chair of the executive board; he was the general manager in charge of ordering food from the Central Illinois Food Bank in Springfield, Illinois, and the facility upkeep and general duties for operation. A Private Family Service for James David White will be held at a later date with burial to follow at Hillcrest Memorial Park in Centralia. In honor of Jim, memorial donations may be made to the CCBA Food Pantry in Centralia and will be accepted at the Sutherland-Garnier Funeral Home at 235 North Sycamore Street Centralia, Illinois 62801, (618)532-3523, who is honored to be of service to the White Family. Online condolences may be made to the family by visiting www.sutherlandfuneralhome.com and the Sutherland-Garnier Funeral Home Facebook Page.

James David White was born April 14, 1948, at Missouri Baptist Hospital in St. Louis, Missouri, and entered into Eternal Rest on Friday, October 2, 2020, at his home. James was born to parents Eunice A. White (daughter of Evelyn and Lawrence... View Obituary & Service Information

The family of James D. White created this Life Tributes page to make it easy to share your memories.

Send flowers to the White family.