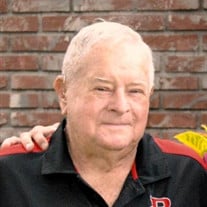 James Earl Stinson, born February 3, 1933 in Ruth, MS. Passed away on Saturday, September 5, 2020 at St. Mary’s Hospital in Centralia, IL. He was the son of Myrtie Lou and Emmitt Stinson. He served in the Air Force as a military policeman form 1951-1955. He was deployed to Korea during the Korean War and served his country with pride. He married Kay Hottensen on May 25, 1957. They had 4 children and enjoyed 55 years of marriage. Jim took care of Kay in sickness and in health until her death in 2012. He worked at Tri-County Electric Cooperative for 36 years. He was a charter member of the Kiwanis Club in Salem, a member of IBEW and The American Legion. He was a lifetime member of the Elks and the Amvets. He coached Little League and volunteered many hours to the building and maintaining of baseball fields in the community. James’ greatest joys came from being a father, grandfather and great-grandfather. He is survived by his children, Paula (Dennis) Flanagan, Sherry Williams, Mark (Teri) Stinson, and Keith (Katy) Stinson. He was blessed with 12 grandchildren and 11 great grandchildren. Throughout his life he and Kay travelled many miles to be proud supporters of their kids, grandkids and great-grandkid’s activities. They always carried a cooler along with Snickers candy bars and drinks for anyone that needed a snack. He froze many gallons of ice cream, cut many watermelons and treated all that were involved to ice cream or pizza. He touched many lives with his generosity. He will be greatly missed by all who were blessed to have known him. He was preceded in death by his wife, 3 brothers and 1 granddaughter. As per his wishes he will be cremated and buried next to his wife. There will be a visitation in his honor at Sutherland-Rankin Funeral home on Monday, September 7 from 11 am – 1 pm. In lieu of flowers, donations may be made to the Salem Little League, St. Judes, The Alzheimer’s Association or the Charity of the donor’s choice.

James Earl Stinson, born February 3, 1933 in Ruth, MS. Passed away on Saturday, September 5, 2020 at St. Mary&#8217;s Hospital in Centralia, IL. He was the son of Myrtie Lou and Emmitt Stinson. He served in the Air Force as a military policeman... View Obituary & Service Information

The family of Mr. James "Jim" E. Stinson created this Life Tributes page to make it easy to share your memories.

Send flowers to the Stinson family.