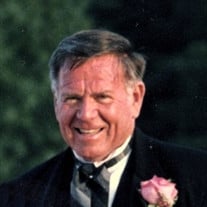 James D. "Jim" Hester, 83, of Alma, Illinois passed away August 9, 2021 surrounded by the natural beauty of his family home n the loving care of his wife and best friend. Jim was born May 24, 1938 in Alma, Illinois, always maintaining strong connections in the Alma community and it's history which he lovingly called home. He was the son of William Phipps "Bill" Hester and Ella Mae Egelston Florey Hester. As a young child, Jim spent much time with his grandmother Mary Elizabeth Florey who always lived with the family, and remained very close to her his entire life. He also attended the Alma United Methodist Church in his younger years. He was a member of the Masonic Lodge, and faithfully served in the United States Army. Jim worked various places throughout his life. He retired with 16 years of service from the Marion County Housing Authority. He married the love of his life, Mary Lou Cessna, September 15, 2001 and she survives on their farm, along with his best buddy "Scout." Also left to mourn his passing are Jim's two sisters, Carolyn Sue Hulsey and Rebecca Jones, both of Kinmundy, IL. Also his nieces and nephews always dear to his heart, including Tara Hulsey, Kelley Hulsey, Amber Hearn, Susan Jones, Jennifer King, Matt Jones and Brandy Smith along with their children. In addition to his parents and grandparents, he was preceded in death by his loving niece, Heidi Ford, and brothers-in-law, Dale Hulsey and Sam Jones. Funeral services will be 2:00 pm Monday at the Sutherland - Rankin Funeral Home in Salem. Visitation will be 12 o'clock noon until 1:30 pm. Masonic rites will be conducted at 1:30 pm, followed by the funeral service. Military honors will be accorded at the funeral home by the Salem American Legion Post #128 of Salem immediately following the funeral. Burial will be private. Memorials may be made to the Donor's choice and will be accepted by the Sutherland - Rankin Funeral Home, P.O. Box 97, 310 N. Broadway, Salem, IL 62881 (618) 548-1234, entrusted with the family's care. On line condolences may be left at sutherlandfuneralhome.com.

James D. "Jim" Hester, 83, of Alma, Illinois passed away August 9, 2021 surrounded by the natural beauty of his family home n the loving care of his wife and best friend. Jim was born May 24, 1938 in Alma, Illinois, always maintaining strong... View Obituary & Service Information

The family of Mr. James "Jim" Daniel Hester created this Life Tributes page to make it easy to share your memories.

Send flowers to the Hester family.