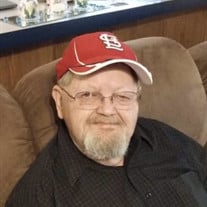 James Michael “Porky” Dothager, 70, of Centralia, passed away Sunday, April 3, 2022 at SSM Health Good Samaritan Hospital in Mt. Vernon surrounded by his family. Mike was born April 28, 1951 in Centralia, the son of Bennie Dothager and Beulah (Brewer) Dothager. He married Patricia "Patty" Wright on January 17, 1976 in Centralia and she survives him. In addition to his wife of 46 years, he is survived by one son: Tom Dothager of Iowa; daughter: Tracy Muñoz and husband Saul of Carbondale; four grandchildren: Benjamin Dothager, Macy Muñoz, Ivy Muñoz, and Soli Muñoz; aunts and uncles: Jean Thompson of Centralia, Carol Mathis and husband DeLane of Salem, and Dr. Ann Beatty and husband Dr. Michael of Edwardsville; several cousins: Mindy Seger and husband Dave of Centralia, Eric Mathis of Centralia, Pat Chapman of Centralia, and Dana Chapman Dukes and special friend Dale Arning of Centralia; brothers and sisters-in-law: Ricky Wright and Linda of Arnold, MO, Tom Pollard of Iowa, Steve Pollard and wife Debbie of Iowa, Melvin Jones of Iowa, James Carter and wife Cona of Arkansas, Judy Carter of Iowa, and Diana Thurman of Missouri. Mike was preceded in death by his parents: Bennie and Beulah Dothager; grandparents: Clarence Brewer and Emmaline Brewer-Scott, Sidney Dothager, and Earnest and Arline Werner; an aunt: Martha Chapman and husband Charles; cousins: infant Christopher Shannon Mathis, Tina Emmett, Shawn Chapman, and Matt Beatty. Mike worked for the Burlington Northern Santa Fe Railroad for 25 years. He was the last President of the NARVRE Association. Mike was known for being an avid STL Cardinals fan, STL Blues, and the bands: Sound Waves and WHO. Being a true animal lover, he enjoyed fostering and rescuing animals. Most of all Mike enjoyed spending time with his greatest enjoyments, his family. A Celebration of Life Service will be held at 1:00 p.m. Friday, April 8, 2022 at the Sutherland-Garnier Funeral Home in Centralia, with Pastor Brad Henson officiating. Burial will follow at Hillcrest Memorial Park in Centralia. Visiting hours for family and friends will be from 12:00 p.m. to 1:00 p.m. at the Funeral Home on Friday, April 8, 2022. In memory of Mike, memorial donations may be made to the Cornerstone Methodist Church or to the Centralia Humane Society and will be accepted by the Sutherland-Garnier Funeral Home at 235 North Sycamore Street in Centralia, IL 62801 (618) 532-3523, who is honored to be of service to the Dothager family. Online condolences may be made to the family by visiting www.sutherlandfuneralhome.com or the Funeral Home’s Facebook page.

The family of James Michael Dothager created this Life Tributes page to make it easy to share your memories.

Send flowers to the Dothager family.