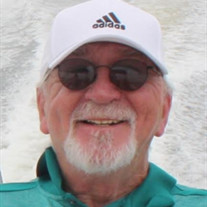 James William Berry, 75, of Centralia, passed away. on Jan. 6, 2022, at his home. He was born Jan. 5, 1947, in Philadelphia, the son of Gordon Francis and Rose Marie (Zatavesky) Berry. He married Judy Kay Wilkinson on Feb. 4, 1967, at St. Mary Catholic Church in Centralia, with Fr. A.B. Schomaker officiating, and she preceded him in death on Nov. 14, 2014. Survivors include four children, Susan Garrison of Centralia, Michelle Pennington and husband Wilfred of Centralia, Matt Berry and wife Michelle of Charleston and Christopher Berry and wife Heidi of Centralia; grandchildren Arianne Courtney, Kirstin Grimes and husband Mark, Kaylin Courtney and friend Carter Wynne, Carly Garrison and Trecie Pennington, all of Centralia; great-grandchildren Illiana “Lilly” Grimes and Kyden Garrison of Centralia; one brother, Harold Berry of New Jersey; and several nieces and nephews. He was preceded in death by his parents, his wife, one brother, Gordon “Huck” Berry, one sister, Rosemarie “Ree” Kalpokas, a sister-in-law Marilyn Wilkinson, a son-in-law Otis Garrison and two nephews, Mark and Eric Berry. Mr. Berry was a veteran of the Vietnam War, where he served as a medical service corpsman at the 12th USAF Hospital, Cam Ranh Bay, South Vietnam. He enlisted in 1964 and was discharged in 1968 at the rank of sergeant (E-4). Stateside, he served as a ward attendant at Scott Air Force Base. In a truth stranger than fiction, Berry would tend to an ailing U.S. Army sergeant at Scott Air Force Base, little knowing that the man was the father of the woman he would meet and marry two years later. Active in the local Vietnam Veterans of America in the 1980s and 1990s, he was editor of the chapter’s nationally recognized newsletter and was among those instrumental in having the Quad-County Vietnam Memorial erected in Fairview Park. He graduated with an associate’s degree from Kaskaskia College and worked briefly for the Illinois Department of Public Aid before going to work for the Texaco Oil Company, where he served in various roles as roustabout, water plant operator and safety organizer. He continued to work for Texaco’s successor, Citation Oil, before retiring. After retirement, he worked part-time at the Centralia Public Library. He grew up on Watkins Street in South Philadelphia, and was a lifelong fan of doo wop and early rock and roll music. His childhood nickname was “Professor,” drawing on his keen intellect and sharp wit. A lifelong sports fan, he enjoyed cheering on his beloved Phillies and Eagles. He fulfilled a dream of his when he operated his own disc-jockey business, J.B.’s Night Train, in the 1980s, and was a familiar source of music for many class reunions and at area nightclubs, including Peggy Sue’s in downtown Centralia. He enjoyed listening to music, singing, writing and reading. Later in life he picked up the pastime of golfing and enjoyed hitting the greens with Dale Spitler and his other golfing buddies. He was a devoted father and grandfather, but perhaps most of all, was a loving husband to his wife, Judy, to whom he was married for 47 years before her passing in 2014. They attended countless concerts together including favorites like Bruce Springsteen and Ronnie Spector. The pair also enjoyed extensive travel, including adventures with their dear friends Nancy and Dale Spitler. Funeral services will held at 11 a.m. on Wednesday, Jan. 12, at Sutherland-Garnier Funeral Home in Centralia, with the Rev. Joannie Naraghi officiating. Friends may call from 10:30 am to the time of services. Military rites will be accorded gravesite by the Centralia American Legion Post 446 and the Centralia VFW Post 2055. Interment will be at Hillcrest Memorial Park in Centralia. Memorial donations may be made to the Centralia American Legion Post 446 and Centralia VFW Post 2055 and will be accepted at the Sutherland-Garnier Funeral Home at 235 North Sycamore Street Centralia, Illinois 62801, (618)532-3523, who is honored to be of service to the Berry Family. Online Condolences may be made to the family by visiting www.sutherland funeral home.com and the Sutherland-Garnier Funeral Home Facebook Page.

The family of James Berry created this Life Tributes page to make it easy to share your memories.

Send flowers to the Berry family.