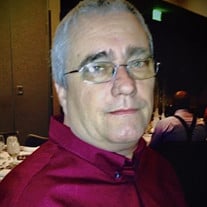 Jacob “Jake” Ferguson Siebels, 59, of Mt. Vernon, Illinois, passed away Wednesday, Dec. 29, 2021, in his home surrounded by family. Jake was born March 11, 1962, in Hinsdale, Illinois. He married Diana (Evanoff) Siebels on Dec. 29, 1989, in Willow Springs, Illinois. He passed away on their 32nd wedding anniversary. In addition to his wife, Diana, he is survived by his three children: Frank Skalski of Mt. Vernon, Ginny Hamilton and significant other Brent Holden of Sherborn, MA, and Katie Brooks and husband Alex of Mt. Vernon; and three grandchildren: Sarah Skalski, Jack Skalski, and Bentley Brooks all of Mt. Vernon. Jake was preceded in death by his aunt and uncle: Mary and Claude Champ and his mother-in-law: Ann Evanoff. Jake was a humble and honest man. He worked as an over-the-road truck driver for 30 years before he retired last year. While working for West Side Transport, he was honored for driving his semitrailer more than two million consecutive miles completely accident free. It would take an average driver nearly 150 years to reach two million miles, according to Federal Highway Administration data, which is the equivalent to more than 80 trips around the Earth. He was of the Lutheran faith and was a member of the Faith Lutheran Church of Mt. Vernon. He loved riding his Harley Davidson and enjoyed spending time with his family. He visited with his 6-year-old grandson Bentley nearly every day, playing games and watching videos. He was an avid Packers fan and relished watching the Packers beat the Bears. He was a loving husband, father, and grandfather. He will be dearly missed by all who knew him. Per Jake Siebels’ wishes, cremation rites were accorded and no public services will be held at this time. Donations may be made to a memorial and widow fund that has been setup at https://gofund.me/c9adbe5c. Arrangements are being handled by Sutherland-Garnier Funeral Home at 235 North Sycamore Street Centralia, Illinois 62801, (618) 532-3523, which is honored to be of service to the Siebels Family. Online condolences may be made to the family by visiting www.sutherlandfuneralhome.com and the Sutherland-Garnier Funeral Home Facebook Page.

The family of Jacob Ferguson Siebels created this Life Tributes page to make it easy to share your memories.

Send flowers to the Siebels family.