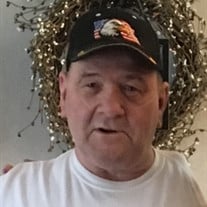 Jack A. VanGilder, 74, of Centralia, passed away Sunday, July 4, 2021, surrounded by his family. He was born June 8, 1947 in Streator, Illinois, the son of Jesse VanGilder and Thelma (Murphy) VanGilder. He married Janice Elaine Funkhouser on November 13, 1971 and she preceded him in death on October 28, 1991. Jack is survived by his four children: Jack L. VanGilder and fiancé Sara Brashear of Centralia, Roger VanGilder and fiancé Amy Myers of Wamac, Connie VanGilder Gaston and husband Darin of Kell and Karen Eller and husband Eric of Centralia; grandchildren: Gabby Eller, Trevor Eller, William Gaston, Ezra Gaston, Hanna Gaston, Landon VanGilder, Serena Erbes, and Alaina VanGilder on the way; a sister: Helen Wilkey of Marion, Illinois; several nieces and nephews. Jack was preceded in death by his parents: Jesse and Thelma VanGilder, wife: Janice Elaine VanGilder, two grandchildren: Jacob Gaston and Janna Gaston, and a brother: Jesse VanGilder and two sisters: Donna Wills and Betty VanGilder. Jack worked at Rockwell for 30 years. He enjoyed fishing and was a member of the Centralia Moose Lodge. He was also an avid Chicago Cub's Fan. Jack cherished the time he spent with his family, friends, and his four legged companion, Junior. Funeral Services for Jack VanGilder will be held Friday, July 9, 2021 at 11:00 AM at the Sutherland-Garnier Funeral Home in Centralia. Burial will follow at Hillcrest Memorial Park in Centralia. Visitation will be held Thursday, July 8, 2021 from 5:00 PM to 7:00 PM at the funeral home. In lieu of flowers, memorial donations may be made to St. Judes Children's Research Hospital and will be accepted at the Sutherland-Garnier Funeral Home at 235 North Sycamore Street Centralia, Illinois 62801, (618)532-3523, who is honored to be of service to the VanGilder Family. Online condolences may be made to the family by visiting www.sutherlandfuneralhome.com and the Sutherland-Garnier Funeral Home Facebook Page.

Jack A. VanGilder, 74, of Centralia, passed away Sunday, July 4, 2021, surrounded by his family. He was born June 8, 1947 in Streator, Illinois, the son of Jesse VanGilder and Thelma (Murphy) VanGilder. He married Janice Elaine Funkhouser on... View Obituary & Service Information

The family of Jack VanGilder created this Life Tributes page to make it easy to share your memories.

Jack A. VanGilder, 74, of Centralia, passed away Sunday, July...

Send flowers to the VanGilder family.