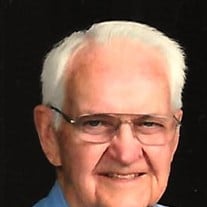 Jack Richard Mann, 89, of Centralia, passed away Sunday, August 8, 2021 at SSM Health Good Samaritan Hospital in Mt. Vernon. Jack was born October 20, 1931, in Thayer, Missouri to Dewey and Martha (Schrader) Mann. Along with his parents, he was preceded in death by a brother, Reverend Charles Mann, a brother, Dewey Mann and sister, Mary Harp. From his first marriage, he is survived by his children Gregory (Becky) Mann of Clarksville, TN and Michelle Miller of Houston, TX and grandchildren Curt, Eric, and Amy Mann, and Madison and Meredith Miller. On November 1, 1982, Jack married Mary (Huff, Burge) Mann. From her first marriage, Jack is survived by Donna Burge (Dan Adams), Cathy Burge, Karen (Gary) Chianakas, Gina (Larry) Fischer, Mary Burge (Paul Beckley), David Burge, and James (Trina) Burge, as well as 15 grandchildren and soon-to-be 15 great-grandchildren. Jack graduated from the University of Missouri with a degree in Horticulture, earned his Master’s in Political Science from the University of Missouri, and completed graduate coursework at Yale, Southern Illinois University at Carbondale, and the University of Illinois. He was a strong believer in the merits of higher education. He served as an instructor at Kaskaskia College, McKendree University, and Roosevelt University. In his career, he worked at Murray Center, the City of Centralia, and had many consulting positions after retiring. Jack was a member of St. Mary Church in Centralia and served on the financial committee. He was a Grand Knight in the Sandoval Knights of Columbus and served as past President of the Rotary Club where he was awarded the Paul Harris Fellowship, a lifetime award. He was also a member of the Elks Club. He enjoyed gardening, especially his orchids. He was a member of the Missouri Botanical Gardens and earned many state and national awards for his dahlias as well. He also was an avid photographer. He rooted for Mizzou when he could catch games on TV. He had many other hobbies including fishing. Anyone who knew Jack knew that Mary was the center of his universe. They were married 38 years. A Mass of Christian Burial for Jack R. Mann will be held on Saturday, August 14, 2021 at 10:00 a.m. at St. Mary Catholic Church in Centralia. Burial will follow at Calvary Cemetery in Centralia. Visitation will be held an hour before Mass on Saturday, August 14, 2021 from 9:00 a.m. till 10:00 a.m. at the church. In lieu of flowers, memorial donations can be made to the St. Mary’s School, American Heart Association, or American Diabetes Association and will be accepted at Sutherland-Garnier Funeral Home at 235 North Sycamore Street Centralia, Illinois 62801, (618)532-3523, who is honored to be of service to the Mann Family. Online condolences may be made to the family by visiting www.sutherlandfuneralhome.com and the Sutherland-Garnier Funeral Home Facebook Page.

Jack Richard Mann, 89, of Centralia, passed away Sunday, August 8, 2021 at SSM Health Good Samaritan Hospital in Mt. Vernon. Jack was born October 20, 1931, in Thayer, Missouri to Dewey and Martha (Schrader) Mann. Along with his parents, he... View Obituary & Service Information

The family of Jack R. Mann created this Life Tributes page to make it easy to share your memories.

Send flowers to the Mann family.