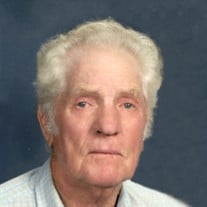 On December 4, 1933, Howard Fredrick Blomberg was born in Kinmundy Township to Charles and Nelle (Diss) Blomberg. He passed away Sunday, February 6, 2022 in Kinmundy. He attended Sherman School, later graduating from LaGrove High School in 1951. After graduation, he helped his family on the farm until he was drafted into the U.S. Navy in 1954. After serving in Corpus Christi, TX, he was stationed at Pearl Harbor, HI, until being discharged in 1956. Upon his return home, his family owned and operated the Minneapolis - Moline dealership in Farina. In 1965, he married Patsy Friesner in Farina. He raised four children while farming and operating Blomberg Trucking and Blomberg Chevrolet. For 50 years, he oiled township roads. He was a man of faith, and a lifelong member of Farina United Methodist. He enjoyed traveling, taking pictures, and his family. In his later years, he enjoyed a weekly trip to the nearby riverboat casinos with his siblings. Surviving are his wife, children Mary Ellen (Darren) Langley, Jane (Chris) Miller, Chris (Michelle) Blomberg, and Dale (Kristi) Blomberg. His grandchildren include Courtney Brockett (Chad Beasley), Evan (Jazmyn) Langley, Alec and Keira Langley; Sydney Miller, husband Owen Leib, Collin Miller; Cauy, Jaron and Kaley Blomberg, and Audrey Blomberg. Howard had one great-granddaughter, Atlas Langley. He is also survived by one brother, Charles Blomberg and wife Zola of Farina, IL. In addition to his parents, he was preceded in death by siblings, Don Blomberg, Helen Voelker, Jean Young and June Curtis. Grandpa Howard will be greatly missed by each of his family members, but rejoice in his reunion with his family that has passed. Funeral services will be held 2:00 pm Wednesday, February 9, 2022 at the Farina United Methodist Church with burial to follow in the Farina Cemetery. Rev. Kevin Kriesel will officiate. Visiting hours will be Tuesday from 4:00 pm until 8:00 pm. at the Farina United Methodist Church, and from 1:00 p.m. until the service hour on Wednesday. The family suggest memorials be to the Farina United Methodist Church and will be accepted by the Sutherland - Rankin Funeral Home P.O. Box 97, 310 N. Broadway, Salem, IL 62881 (619) 548-1234, entrusted with the family's care. Online condolences may be left at sutherlandfuneralhome.com.

The family of Howard Frederick Blomberg created this Life Tributes page to make it easy to share your memories.

On December 4, 1933, Howard Fredrick Blomberg was born in Kinmundy...

Send flowers to the Blomberg family.