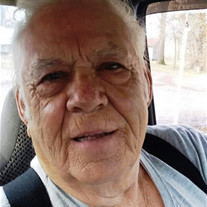 Hershel Ray Higgins, Sr., 76, of Centralia, passed away Tuesday, December 1, 2020 surrounded by family in Deaconess Midtown Hospital in Evansville, IN after complications from falling off a piece of equipment. Hershal was born September 15, 1944 the son of Eddie Higgins and Ethel (Parks) Cole. He married Diane (Brasket) Higgins and she preceded him in death in August of 2000. He then married Barbara (Finckbone) Higgins on November 17, 2001 in Sandoval and she survives him in Centralia. In addition to his wife of 19 years Barbara Higgins, Hershel is survived by two sons: James Higgins and wife Lisa of Central City and Bill Higgins and wife April of Centrralia; two daughters: Jerrie Pfeister of Centralia and Terri Mays of Schoboner, IL; many grandchildren, great-grandchildren, nieces, and nephews; two sisters: Arlene Stringer and husband Randy of Missouri and Jean Timmons and husband Mark of Missouri; one brother-in-law: Albert Finckbone and wife Linda of Centralia; many special friends; and many Masonic friends of both Missouri and Illinois. Hershel was preceded in death by his parents: Eddie Higgins and Ethel Cole; first spouse: Diane Higgins; one son: Hershel Ray Higgins, Jr.; two daughters: Patricia Higgins and Barbara Evans; five brothers: Eddie Higgins, Clyde Higgins, James Roy Higgins, Earl Higgins, and Robert Higgins; two sisters: Pearl Cooley and Lillian Taylor; one brother-in-law: Orville Finckbone; two sisters-in-law: Peggy Higgins and Marget Ray; and his mother and father-in-law: Roy and Peggy Finckbone. Hershel grew up in the Pentecostal faith. In grade school, he attended Post Oak School in Walnut Hill. He also attended schools in Beckmeyer and Carlyle. He worked maintance and as a truck spotter at the Candy Factory. He also was in professional boxing in Golden Gloves. He owned Higgins Savage and Auto Parts in Troy, MO from 1972 till 2000. In 2017, Hershel returned to work as a semi truck driver for Richardson Brothers in St. Elmo, IL where continued to work until September of this year. Hershel loved everything about trucks from driving them to building them. He was a Chevy man and an avid Trump supporter. He was a hard working man all his life. He will be greatly missed by his family. Per Hershel Higgins Sr.'s wishes, cremation rites will be accorded and a Celebration of Life Service will be held at a later date. In lieu of flowers, memorial donations can be made to the Family with checks payable to Barbara Higgins and will be accepted at the Sutherland-Garnier Funeral Home at 235 North Sycamore Street Centralia, Illinois 62801, (618)532-3523, who is honored to be of service to the Higgins Family. Online condolences may be made to the family by visiting www.sutherlandfuneralhome.com and the Sutherland-Garnier Funeral Home Facebook Page.

Hershel Ray Higgins, Sr., 76, of Centralia, passed away Tuesday, December 1, 2020 surrounded by family in Deaconess Midtown Hospital in Evansville, IN after complications from falling off a piece of equipment. Hershal was born September 15,... View Obituary & Service Information

The family of Hershel Higgins, Sr. created this Life Tributes page to make it easy to share your memories.

Send flowers to the Higgins family.