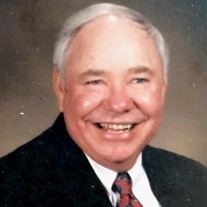 Henry James Rogers, Jr., 90, of Centralia, passed away Friday, November 6, 2020 at Centralia Manor. He was born September 24, 1930 in Bloomfield, Missouri, the son of Henry James Rogers, Sr. and Opal Edith (Harper) Rogers. Henry married Pansy Underwood on April 15, 1950 in Pickett, Arkansas and they later divorced. He married MaryAnn Rahm on May 2, 1975 in Mt. Vernon and she preceded him in death on July 23, 1994. Henry married Ellenora Todahl on September 4, 2004 and they later divorced. He is survived by his two children: Dennis James Rogers and wife Carla of Centralia and Charlotte Ann Haggard and husband Jim of Kansas City, Missouri; four grandchildren: Crystal Gregg and husband Aaron of Salem, Eric Caldwell of Kansas City, Missouri, Erin Kohler and husband Patrick of Fort Irwin, California and Paige Hossler of Centralia; six great-grandchildren: Haley, Nicholas, Emma and Dakota Gregg all of Salem and Sean and Makenna Kohler of Fort Irwin, California; a brother: Larry Rogers and wife Patty of Dexter, Missouri; three sisters: Bertha Johnson and husband Bob of Bloomfield, Missouri, Ella V Dejornett of Malden, Missouri, and Doris Zelridge of of Flint, Michigan; several nieces and nephews. Henry is preceded in death by his parents, wife: MaryAnn Rahm Rogers, five sisters: Lucille Gross. Louise Cox, Betty Faulkner, Freda Lilly, Eddie Lee Mayo, and 3 brothers: Floyd Rogers, Raymond Lloyd Dejornett, and J.D. Dejornett. Henry served as a Corporal in the United States Marine Corps during the Korean War. He worked as a Truck Driver for Valley Steel for 33 years. Henry was a member of the Zion United Church of Christ in Central City, a Life Member of the Centralia Elks Lodge 493, 50 year Member of the Masonic Lodge in Bloomfield, Missouri, a member of the 32nd Scottish Rite Lodge # 1 in St. Louis, Missouri, a member of the Centralia American Legion Post 446, a member of the Eagles and a Lifetime Member of the Sword of Bunker Hill Private Family Services will be held at a later date with burial to follow at Hillcrest Memorial Park in Centralia. In lieu of flowers, memorial donations may be made to the Zion United Church of Christ in Central City and will be accepted at the Sutherland-Garnier Funeral Home and Cremation Services at 235 North Sycamore Street Centralia, Illinois 62801, (618)532-3523, are honored to be of service to the Rogers Family. Online condolences may be made to the family by visiting www.sutherlandfuneralhome.com and the Sutherland-Garnier Funeral Home Facebook Page.

The family of Mr. Henry James Rogers, Jr. created this Life Tributes page to make it easy to share your memories.

Send flowers to the Rogers family.