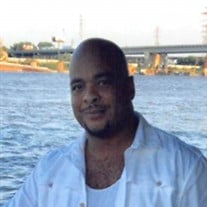 Hector Barnes , 44, of Mt. Vernon Illinois, formerly of Centralia, passed away Wednesday, September 29,2021 at his residence. Hector was born July 15, 1977 in Centralia, the son of Robert “Bobby” Duncan and Rosemary Barnes. Hector married Francine Barnes and they divorced. He married his High School sweetheart Keisha Nelson Barnes on June 15, 2017 and were together until May 2021. Hector is survived by his parents: Robert "Bobby" Duncan and Rosemary Barnes; one daughter: Nyjasiha Barnes of Mt. Vernon; One grandson: Demarous Crawford of Mt. Vernon; One Brother: Dustin Crabtree of Mt. Vernon; One Sister: Marlena Johnson of Centralia; Five aunts: Chandra Thomas, Moneta Williams, Shirlena Barnes, Trudy Barnes-Bailey and husband L.A. Bailey, and Lawanda Barnes all of Centralia. Two uncles: George Barnes of Centralia and Harry James Duncan Jr. and wife Marilyn of Chicago; fiance: Jennifer Robinson of Murphysboro; and many nieces and nephews. Hector was preceded in death by one brother: Arthur Jerome Barnes; three sisters: Shirley Barnes, Muzette Barnes and Breanna Crabtree. Maternal Grandparents: John and Shirley Barnes; Paternal Grandparents: Harry and Muzette Duncan. One aunt: Carmellia “Vanessa” Barnes; three uncles: Steven Barnes, Steven Thomas and Levi Williams, Jr.; and two great uncles: Bernard and Hector Barnes; and one cousin: Levi Williams, III. Hector was blessed to walk this earth for 44 years. He impacted people all over the world. Hector was one that loved to spend time with family. He loved to cook, crack jokes, travel and laughed at everything. He enjoyed life and loved his life. He was very proud of everything in his life and his parents were more proud. Hector was a man of God whom he knew and believed that God died for his sins and that’s when his time on this earth was over. He would one day be in Heaven resting with his Lord. Hector was a member of Second Missionary Baptist Church in Centralia. He was baptized at Rick’s Chapel Church in Centralia as a child. Hector was a legend in Centralia, setting many records in Football, Basketball and Track during his years at Centralia Jr. High and Centralia High School. Hector was one of the greatest players in Southern Illinois. He grew up playing and excelling in many sports. As the 5’ 11” Orphan point guard he averaged 18 points per game. He was All USA honorable 94-95 his junior year. In High School, he moved to Chicago and attended Gage Park High School which was one of the top academic schools in the city his junior year. While attending, he was injured and he wasn’t able to complete his basketball career. However, he did continue his education and graduate from Centralia High School in the Class of 1996. Later on in his life, he attended Bryant Stratton College to major in Human Service/Social Service where he was on the Presidents list. He was destined to make his family proud of him. Hector loved spending time with his family and friends and was a spiritual man that could recite the scripture better than anyone. So many greats gone, so many promises gone, we say farewell to so many talents. Funeral Services for Hector will be held Saturday, October 16, 2021 at 1:00 P.M. at City Hope Church in Centralia with Reverend Val Powe officiating. Burial will follow at Elmwood Cemetery in Centralia. Visitation will be held Saturday, October 16, 2021 at 11:00 A.M. at City Hope Church until time of service. In lieu of flowers, memorial donations may be made to the Family and will be accepted at the Sutherland-Garnier Funeral Home at 235 N Sycamore Street in Centralia, Illinois 62801, (618)532-3523, who is honored to be of service to the Barnes Family. Online condolences may be made to the family by visiting http://www.sutherlandfuneralhome.com and the Sutherland-Garnier Funeral Home Facebook

The family of Hector Barnes created this Life Tributes page to make it easy to share your memories.

Send flowers to the Barnes family.