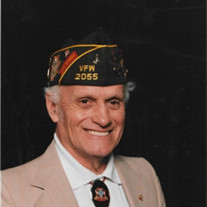 Harry "Les" Leslie Moulton, age 92, of Centralia passed away on Saturday, November 14, 2020 at SSM Health St. Mary's Hospital in Centralia. Les was born on October 20, 1928 in Sandoval, Illinois the son of Harry and Clara (Durall) Moulton. He married the love of his life, Mary Elizabeth Hoskey on February 14, 1952 and she preceded him in death March 7, 2015. Les is survived by one daughter, Brenda Myers of Centralia; one son Norman Ray Moulton of Centralia; seven grandchildren: Larry Baslington, Gary Baslington, Mary Shae Claar and husband David, Bobby Moulton, Jessica Moulton, Jennifer Heinrichsmeyer and husband Skip, and Danielle Myers all of Centralia; 13 great grandchildren: Ashlee Budds and husband Christian, Gary Feazel, Robby Eagan, Alexis Eagan, Kaylea Howell, Skyann Howell, Stewart Stumbaugh, David Stumbaugh, Cameron Moulton, Mason Heinrichsmeyer, Trevor Heinrichsmeyer, Bella Heinrichsmeyer, Ayla Heinrichsmeyer all of Centralia; a great-great-grandson: Rhett Anthony Bonner; a sister: Gail Hart of Richmond, Virginia; several nieces and nephews. Les was preceded in death by his parents, his wife, one son Gary Leslie Moulton who was five years old, a great-grandson: Caleb Eagan, three sisters: Bernice Redman, Bertha Herrin and Georgia Dillinger, and two brothers: Dick Wood and Charles Wood. Les graduated from Franklin Grade School, Centralia High School and Centralia Junior College. He attended Barber College, Real Estate Salesman and Insurance Salesman School. He joined the United States Air Force in 1946 and was discharged in 1949; he was stationed at Langley Field, Virginia, and worked as a radio and teletype operator. He served for a time in Celle, Germany in the coal and food lift. He flew coal and fuel to Berlin to help heat homes and businesses. He was a radio and teletype operator in the Air Force. Les was employed by the Centralia Sentinel, Electro Motive in LaGrange, Illinois in production control of diesel engines, Elgin Watch as purchasing agent, was a Barber for 25 years, and was a Real Estate Agent for Dwight Friedrich. Les served as a Sunday school teacher, usher, greeter, and Membership Chairman for the Central City Baptist Church, being baptized in 1961. Was a member of VFW #2055, served as commander from 1995-1996, trustee for three years, Judge Advocate for five years, Adjunct for 13 years, bingo chairman for seven years, and helped raise funds to build the new building at 1826 South Pine, served as District 13 Commander from 2008-2009, District Adjunct for two years, and District Inspector for one year. Was a life member of the American Legion #446, where he served as Service Officer for two years, and bingo officer for one year. He helped with the Kaskaskia College Veterans Tribute and helped collect ten thousand names for the wall. Was a charter member of the Centralia Historical Society and helped get pictures for the class of 1949. He was a member of the Centralia Moose Lodge for 21 years and helped get to Women of the Moose to collect funds for the Halloween Parade and continued to do so for many years. He volunteered with the Centralia Lions and served as President in 1982 and was the Lion of the Year in 1979. Served as the finance chairman for the Centralia Lions Club for the Halloween Parade for five years. He served with the United Fund as Downtown Chairman in 1982 and met the goal to raise funds. He served with the Salvation Army, was on the board in 1982. Helped build the new Salvation Army building on South Walnut Street after a fire destroyed the old building, articles from the rebuilding were in the Salvation Army National Magazine. He served as District Commissioner of the Boy Scouts of America, Crooked Creek, now known as the Okay Valley Council of Marion, Clinton and Clay Counties. Les helped graduate a class of 16 news commissioners into the council. He served with the Reading Link at Kaskaskia College, had two students who he helped to gain three grades in school, serving until he felt he could no longer do a good job. He loved the St. Louis Cardinal’s because of Harry Cary and Stan the Man (Musial) but his true love was for the Fighting Illini, and March Madness with the Centralia Orphans. Most of all Les enjoyed being with his 2 children, volunteering, gardening, and being with people who lived in Centralia, who were always good to him all his life. His hero in school was Glen Champ, the principal of Central City School and Martin Beck the Chief of Police in Central City. In Les’ words “the worst day of my life was when my son died from measles, but the best day was when I married my wife on February 14, 1952 and was married for 63 years”, and “Centralia was the best place to raise children and live a peaceful life, it isn’t the biggest but it is the best.” Private Family Services will be held and burial will follow at Hillcrest Memorial Park. In lieu of flowers, memorial donations may be made to the Central City Baptist Church and will be accepted at the Sutherland-Garnier Funeral Home and Cremation Services at 235 North Sycamore Street Centralia, Illinois 62801, (618)532-3523, who is honored to be of service to the Moulton Family. Online condolences may be made to the family by visiting www.sutherlandfuneralhome.com and the Sutherland-Garnier Funeral Home Facebook Page.

The family of Harry "Les" Leslie Moulton created this Life Tributes page to make it easy to share your memories.

Send flowers to the Moulton family.