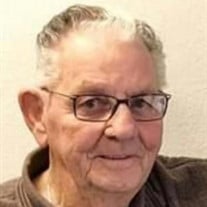 Harold Lee Phelps, 88, of Centralia, passed away Tuesday, February 15, 2022 at his home. He was born February 26, 1933 in rural Marion County, the son of William Alfred Phelps and Flossie (Stanford) Phelps. He married the love of his life, Patsy "Pat" (Bond) Phelps on November 24, 1953 and she preceded him in death on May 16, 2020. Harold is survived by his daughter: Leigh Ann Cox and husband Dave of Pekin; three grandchildren: Emily Waller and husband Mitch of Morton, Brittany Eson and husband Karl of Granite City and Michael Orwig of Pekin; three great-grandchildren: Kennedy Waller, Lincoln Waller, and Theodore Eson; two sisters: Freda Halfacre and husband Glen of Iuka and Phyllis Davis of Salem; two sisters-in-law: Jana Hill and husband Steve of Cary, North Carolina and Jean Bassen and Roy of Hoffman; several nieces and nephews. He was preceded in death by his parents, wife, two brothers: Allen Phelps and Dean Phelps, four nephews: Stephen Phelps, Michael Halfacre, Marvin Phelps, and Scott Bassen, a niece: Sherry Phelps, two brothers-in-law and a sister-in-law. Harold was drafted into the Army in 1953 and was discharged in 1955. He worked as a carman welder for the Illinois Central Railroad for 17 years and he worked as a case worker for 16 years. Harold was a member of the Trinity Lutheran Church in Centralia, where he previously served as an Elder, on the Finance Committee, Youth Counselor, and on the Trustee Committee. Harold cherished the time he spent with his family and friends. Funeral Services for Harold Phelps will be held Saturday, February 19, 2022 at 12:00 PM at the Sutherland-Garnier Funeral Home in Centralia with Pastor Miguel Torneire officiating. Burial will follow at the Hillcrest Memorial Park in Centralia. Military Honors will be accorded at the gravesite by the Centralia American Legion Post 446 and the Centralia V.F.W. Post 2055. Visitation will be held Saturday morning from 11:00 AM until the time of service at the Funeral Home. In lieu of flowers, memorial donations may be made to the Trinity Lutheran Church and/or the Donor's Choice and will be accepted at the Sutherland-Garnier Funeral Home at 235 North Sycamore Street Centralia, Illinois 62801, (618)532-3523, who is honored to be of service to the Phelps Family. Online condolences may be made to the family by visiting www.sutherlandfuneralhome.com and the Sutherland-Garnier Funeral Home Facebook Page.

Harold Lee Phelps, 88, of Centralia, passed away Tuesday, February 15, 2022 at his home. He was born February 26, 1933 in rural Marion County, the son of William Alfred Phelps and Flossie (Stanford) Phelps. He married the love of his life,... View Obituary & Service Information

The family of Harold Lee Phelps created this Life Tributes page to make it easy to share your memories.

Send flowers to the Phelps family.