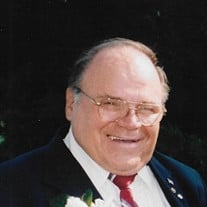 Gerald “Pete” Peterson, 81, of Centralia, passed away Saturday, February 13, 2021 at St. Elizabeth’s Hospital in O’Fallon. He was born June 17, 1939 in Two Harbors, Minnesota, the son of Linus Peterson and Esther (Karvonen) Peterson. He married Lorriane (MacDonald) Norris on November 18, 1994 in Polk County, Texas and she survives in Centralia. In addition to his wife of 26 years, Lorraine Peterson of Centralia, he is also survived by his three children: Kandi Fritz of Fenton, Missouri, Kimberly Sue White of College Station, Texas, and Wayde Peterson of Kingsley, Michigan; seven grandchildren and six great-grandchildren; two brothers and a sister: Dale Peterson and wife Jan of Walla Walla, Washington, Darlene Gould and husband Lynn of Princeton, Minnesota, and Duane Peterson of South Range, Wisconsin; several nieces and nephews. He was preceded in death by his parents: Linus and Esther Peterson and an infant sister: Diane Peterson. Pete served in the U.S Air Force during the Vietnam War as an airplane mechanic. He served in the Air Force for 22 years. He was a member of the Centralia American Legion Post 446, Centralia V.F.W. Post 2055, and the Centralia Elks Lodge 496. Pete was also a member of St. Mary Catholic Church in Centralia. He enjoyed wood working and was a perfectionist when it came to his work. Per his wishes, cremation rites will be accorded and a Memorial Service for Gerald “Pete” Peterson will be held Thursday, February 25, 2021 at 11:00 AM at the Sutherland-Garnier Funeral Home in Centralia with Father Steven Pautler officiating. Military Honors will be accorded at the funeral home by the Centralia American Legion Post 446 and the Centralia V.F.W. Post 2055. A visitation will be held Thursday morning from 10:00 AM until the time of service at the funeral home. In honor of Pete, memorial donations may be made to the Centralia American Legion Post 446 and will be accepted at the Sutherland-Garnier Funeral Home at 235 North Sycamore Street Centralia, Illinois 62801, (618)532-3523, who is honored to be of service to the Peterson Family. Online condolences may be made to the family by visiting www.sutherlandfuneralhome.com and the Sutherland-Garnier Funeral Home Facebook Page.

The family of Gerald Peterson created this Life Tributes page to make it easy to share your memories.

Send flowers to the Peterson family.