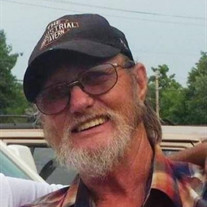 Francis Rowcliff, Sr., 75, of Centralia, passed away January 2, 2021 at SSM Health St. Mary's Hospital in Centralia. He was born September 7, 1945 in Fairbury, Illinois, the son of Cyril Rowcliff and Hazel (Bull) Rowcliff. He married Marilyn Mays on March 24, 1969 in Mt. Vernon and she survives in Centralia. In addition to his wife of 51 years, Marilyn Rowcliff of Centralia, he is also survived by his four children: Carol Rowcliff of Centralia, Mary Wilkerson and husband Jeff of Shobonier, Francis "Frankie: Rowcliff, Jr. of Centralia and Charles Rowcliff and wife Patty Gail of Shobonier; twenty-two grandchildren and 30 great grandchildren, with two on the way; eight siblings: Helen Hull of Sandoval, Howard Rowcliff and wife Mary of Assumption, John Rowcliff and wife Linda of Junction City, Herman Rowcliff and wife Brenda of Centralia, Clifford Rowcliff and wife Dana of Junction City, Christine Johnston and husband John of Missouri, Wilma Ward of Sandoval, and William Rowcliff and wife Candie of Missouri; sister-in-law: Mary Rowcliff of Junction City; several nieces, nephews and cousins. Francis was preceded in death by his parents, two grandchildren: Tiffany Rowcliff and Dakota Rocliff, five brothers: Harold Rowcliff, Wesley Rowcliff, Charles Rowcliff, James Rowcliff, and Henry Rowcliff, and five sisters: Josephine Wennerstrom, Wanita Altom, Esther Rowcliff, Trudy Rowcliff and Carol Hancock. Francis lived in Centralia for over 50 years. To many people in the area he was known as the "Lawnmower Man", he would mow lawns and repair lawnmowers. He had a big heart and would help anyone. Francis loved spending time with his family and friends. A Celebration of Life Service will be held Thursday, January 7, 2021 at 1:00 PM at the First Pentecostal Church in Patoka with Rev. Richard French officiating. A Visitation will be held Thursday morning from 11:00 AM until the time of service. In lieu of flowers, memorial donations may be made to the family will be accepted at the Sutherland-Garnier Funeral Home and Cremation Services at 235 North Sycamore Street Centralia, Illinois 62801, (618)532-3523, who is honored to be of service to the Rowcliff Family. Online condolences may be made to the family by visiting www.sutherlandfuneralhome.com and the Sutherland-Garnier Funeral Home Facebook Page.

The family of Francis Rowcliff, Sr. created this Life Tributes page to make it easy to share your memories.

Send flowers to the Rowcliff family.