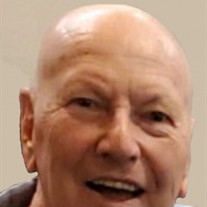 Everett Ray Stowers 75, of Centralia passed away Wednesday, October 20, 2021 at his home surrounded by his loving family. Everett was born February 16, 1946 in Ravendend, Arkansas, the son of Everett Glenn Stowers and Freda (Culver) Stowers. He married Mary Janeen Phelps on June 7, 1969 at the First Apostolic Church in Centralia and she survives him in Centralia. In addition to his wife of 52 years, he is survived by a son: Philip Stowers of Maumelle, AR and a daughter: Eleshia Kirsch and husband Michael of Nashville, IL. One grandchild: Austin Kirsch of Nashville, IL. One sister: Freda Allen and Tom of Centralia, brother-in-law: Daniel Phelps and wife Cheryle, one sister-in-law: Gayla Mooney and husband Bill of Walnut Hill, several nieces and nephews and great nieces and nephews, a host of friends and his beloved church family. He was also survived by his beloved grand dogs: Bella Kirsch and Buddy Stowers. Everett Ray was preceded in death by his parents: Everett Glenn and Freda Stowers, three brothers: Glenn Stowers, Fred Stowers, and Harold Stowers, his father-in-law, Robert Dean Phelps and mother-in-law, Mary Evelyn Phelps. Two nephews: Robbie Jolliff and Brandon Mooney, and his four legged companion “ Lady”. Everett Ray was a custodian for Centralia High School from 1967-2001. Everett Ray proudly served in the U.S Army from November 1965 to November 1967, he was an Army Sergeant E5. He became a member of the First Apostolic Church in 1968 and remained an active member until his passing. He served on the church board from 1977 to 2008, he was also a Sunday School Superintendent, he loved his family, the Lord and his Church Pastor and his Church Family. The family of Everett Ray would like to give a special thanks to the Oncology Department at SSM Health St. Mary’s Hospital in Centralia, Dr. Mahmud and staff, Residential Hospice and especially Barb, Traci, Jeanne and Morgan for taking such wonderful care of Everett during his time of illness. Funeral Services for Everett Ray Stowers will be held Friday, October 22, 2021 at 11:00 am at the First Apostolic Church in Centralia with Pastor Jonathan Urshan officiating. Burial will follow at Hillcrest Memorial Park with Military Honors at the gravesite by the American Legion Post 446 and the V.F.W. Post 2055 in Centralia. A visitation for family and friends will be held Friday, October 22, 2021 at the First Apostolic Church in Centralia from 9:00 am till the time of service. In honor of Everett Ray, memorial donations may be made to the First Apostolic Church maintenance and building fund and will be accepted by the Sutherland-Garnier Funeral Home at 235 North Sycamore Street in Centralia, Illinois 62801 (618) 532-3523, who is honored to be of service to the Stowers family. Online condolences may be made to the family by visiting www.sutherlandfuneralhome.com or the Funeral Home’s Facebook page.

The family of Everett Ray Stowers created this Life Tributes page to make it easy to share your memories.

Send flowers to the Stowers family.