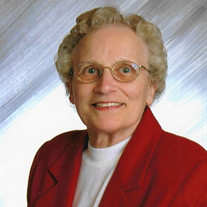 Evelyn “Tiny” Terry, 91, of Centralia, passed away Monday, July 12, 2021, in Centralia. Tiny was born June 30, 1930, near Randall, Iowa, daughter of Nels and Evelyn (Ferguson) Henrickson. She married Dr. Wayne Terry on April 8, 1950, in Genoa, Wisconsin, and he preceded her in death in 1998 after 48 years of marriage. Tiny is survived by son Dr. Mark Terry of Venice, Fla.; daughter Cynthia Fulton of Centralia; son Dr. Brian Terry and wife Cheryl of LaGrange, Ga.; grandchildren Christen Terry, Lindsay Shaw and husband Brian, Matthew Terry and wife Jenni, Sarah Atteberry and husband Chance, Gregory Terry; great-grandchildren Logan and Reagan Shaw, and Carolyn and Timothy Terry. Tiny is also survived by sister-in-law Jananne Threlkeld; brother-in-law Harold “Bud” Terry and wife Diane; seven nieces and four nephews. In addition to her husband, she was preceded in death by her parents; two sisters; two brothers; and daughter-in-law Michele Terry. Tiny graduated from Randall High School in 1948. She later attended American Institute of Commerce in Davenport, Iowa, where she played basketball, and toured Mexico and Central America. She was an avid golfer and enjoyed meeting new people in many tournaments and guest days. Being raised on a farm, she knew the meaning of work. Tiny enjoyed taking care of the lawn and painting, washing and waxing cars. She helped at her husband’s office while being a homemaker. She liked to have fun and enjoyed a good joke. Tiny was a member of First United Methodist Church and of the Lady Elks, where she served as the chaplain for many years. She was also president of Centralia Code Advisory Committee for several years. She was the first president of the Greenview Ladies Golf League when it began in 1965. Please join Tiny’s family as they celebrate her life at 2 p.m. on Saturday, July 17, 2021, at Sutherland-Garnier Funeral Home in Centralia. Friends are welcome to a visitation at the funeral home beginning at 12:30 p.m. until the time of the service on Saturday. In lieu of flowers, memorials may be made to the First United Methodist Church or Centralia Elks Lodge 493 and will be accepted at the Sutherland-Garnier Funeral Home at 235 North Sycamore Street Centralia, Illinois 62801, (618)532-3523, who is honored to be of service to the Terry Family. Online condolences may be made to the family by visiting www.sutherlandfuneralhome and the Sutherland-Garnier Funeral Home Facebook Page.

The family of Evelyn "Tiny" Terry created this Life Tributes page to make it easy to share your memories.

Send flowers to the Terry family.