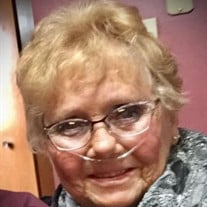 Eula Fay Buchanan, 67, passed away Wednesday morning, October 7, 2020 at her home. Fay was born July 10, 1953 in Franklin, TN, the daughter of James E. and Thelma Mae Fitzgerald Prince. She married Ken Buchanan May 27, 1989 at Central City Park. Fay, known as Tennessee, worked as a bartender at several bars for 20 years, mostly at the Broadway Tavern and Kay’s 101 in Central City. She then was a Teacher’s Aide (program assistant) with Kaskaskia Special Education District for over 20 years before retiring in 2017. She enjoyed working with kids and staff at the Hoyleton Education Center and Centralia High School Annex. She loved to travel to the beach to hear the waves and have sand on her feet and watching the sunset. She also was a member of the VFW Auxiliary. Most of all she loved entertaining family and friends and sitting by her pool at home. Survivors include Ken Buchanan her husband; special cousin Melinda Warhurst and husband Kenneth of Albama; sister-in-law Doris Wimpy and husband Bill of Centralia: nieces: Pam Dodillet and husband Gary of Centralia, Sherry Downey and husband Bob of Viola, IL, Leigh Ann Noller and husband Jack of Troy, IL, and Loni Shouse and husband Michael of Columbia, TN; nephews: Mike Fowler and wife Julie of Illinois City, Greg Crouch of Centralia, and Mike Crouch and wife Lisa of Centralia; several great nieces and nephews; and her family of special friends: Mike Ritchie, Allen and Dianna Zelasko, Joan Hoffman, Jane Daugherty, and Maddie and Gina Feazel. She was preceded by her parents, grandparents, sisters: Francis “Mickey” Edwards and Flo Fowler, brothers-in-law: Don Edwards and Carl Fowler, nephew Jerry Edwards, and in-laws: Jim and Lucille Buchanan. Per Fay’s wishes, she will be cremated. A Celebration of Life Gathering is planned for Sunday, October 18th, 2020 from 3:00 PM to 5:00 PM at the Central City Lions Park. The family suggests that masks and social distancing is observed. Memorials in Fay’s honor can be made to the Central City Park Grant Fund and Centralia Humane Society and will be accepted at the Sutherland-Garnier Funeral Home at 235 North Sycamore Street Centralia, Illinois 62801, (618)532-3523, who is honored to be of service to the Buchanan Family. Online condolences may be made to the family by visiting www.sutherlandfuneralhome.com and the Sutherland-Garnier Funeral Home Facebook Page.

The family of Eula Fay Buchanan created this Life Tributes page to make it easy to share your memories.

Send flowers to the Buchanan family.