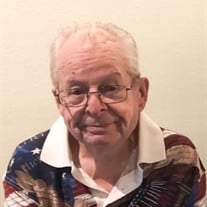 Ernest Stuber, 82, of Centralia, passed away Thursday, June 17, 2021 at St. Joseph Hospital in Breese, Illinois. He was born October 12, 1938 in Mendota, Illinois, the son of Emery Stuber and Maude (Pennington) Stuber. He married Sandra “Sandy” Robbins on July 11, 1959 and she survives in Centralia. In addition to his wife of 61 years, Sandra “Sandy” Stuber of Centralia, he is also survived by his three children: Douglas Stuber of Centralia, Rhonda Stuber Owens and husband Robert of Salem, and Bridgette Stuber of Centralia; a granddaughter: Tiffany Jo Owens of Joliet; two step-grandchildren; nine step great-grandchildren; a brother: Jerry Stuber and wife Linda of Centralia; a brother-in-law: Don Robbins and wife Dianne of Central City; several nieces, nephews, great-nieces, great-nephews and cousins. He was preceded in death by his parents: Emery and Maude Stuber, several aunts and uncles, four brothers-in-law and a sister-in-law. Ernest worked at Wheaton Plastics for 40 years. In his teenage years, he enjoyed drag racing. He also enjoyed hunting, fishing and playing golf with his brother, Jerry. Ernest rode motorcycles with his wife, Sandy. He cherished the time he spent with his wife, children, family and friends. Funeral Services for Ernest Stuber were held Saturday, June 19, 2021 at 2:00 PM at the Hillcrest Lakeside Chapel in Centralia. Entombment followed in the Hillcrest Lakeside Mausoleum in Centralia. Visitation was held Saturday afternoon from 1:00 PM to 2:00 PM at the chapel. In lieu of flowers, memorial donations may be made to the Relay for Life (Centralia) and will be accepted at the Sutherland-Garnier Funeral Home 235 North Sycamore Street Centralia, Illinois 62801, (618)532-3523, who is honored to be of service to the Stuber Family. Online condolences may be made to the family by visiting www.sutherlandfuneralhome.com and the Sutherland-Garnier Funeral Home Facebook Page.

The family of Ernest L. Stuber created this Life Tributes page to make it easy to share your memories.

Send flowers to the Stuber family.