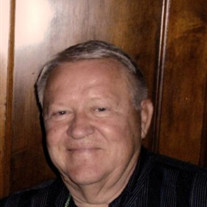 Edward Boyd, 84, of Salem, passed away Friday, July 24, 2020 at Doctors’ Nursing and Rehabilitation Center in Salem. Ed was a member of the Salem Presbyterian Church for over 50 years and acted as head of the Building & Grounds committee for countless years, as well as serving as an elder and deacon. Additionally, he was a member of the Salem Elks and American Legion. A star athlete at Salem Community High School, Ed played baseball and was co-captain of the football team, playing in (and winning!) the inaugural Shrine Football game in 1952. He was always proud to have been part of this team that was later inducted into the SCHS Sports Hall of Fame in 1996. He graduated from Ranken Trade School in St. Louis and worked as a draftsman and surveyor. After marrying his high school sweetheart whom he met in Spanish class, Ed went on to serve in the Army a short time from 1957-58 and was stationed at Fort Hood, playing baseball on his unit’s team, where he would jokingly boast that he “fought the battle of Texas with his catcher’s mitt.” The majority of his career, he worked as an independent sales representative for building material companies, driving a six-state territory. By his own calculations, he logged driving over 3 million miles and never let his family forget it. Ed could always tell you the best place to find a roadside BBQ place in Nebraska, Arkansas, Iowa, Missouri, or Indiana. Perhaps most tellingly, his biggest pride was his family. Ed always deflected the praise for successfully raising his five daughters to be largely his wife’s efforts, but his role was massive. A friend states it best: “I’ve never, and I mean never, seen a man love his children with the intensity that he did.” Ed loved Cardinal baseball, big band era music, desserts of any kind, long naps, animals, coffee with friends, home improvement projects, working in the yard, and was perhaps the greatest leaf-raker of all time. He strongly disliked weak coffee, crumbs, telemarketing calls, muddy shoes, mumbling, his time being wasted, and dirty cars. Known for a rowdy sense of humor, Ed enjoyed good-natured joking and teasing. He could dish it out as well as take it. Proud of his humble upbringing in the east side of Salem during the Depression, this ingrained a toughness and resiliency in him that became a mantra of sorts within the family, to encourage his daughters to persevere in the face of any obstacles: “Remember, your roots are in Frisco!” Survivors include five daughters: Jan (Randy) Will of St. Louis, Missouri; Nancy Starr of Omaha, Nebraska; Amy (Doug) Telford of Salem; AnnaLee Boyd of Kansas City, Missouri; and Sara Boyd of St. Louis; five grandchildren: Caitlin Link, Zachary Will, Ashley and Amy Anne Starr, and Maggie Telford; two-great-grandchildren: Brianna and Montana; and special friend Lola Devall of Vandalia, Illinois. Ed was born on Dec. 22, 1935, in Omega, Illinois, the son of Glen and Geneva “Bebe” (Sipes) Boyd. He married Ida (Norris) Boyd on Sept. 3, 1955, at the Broadway Christian Church in Salem. He was preceded in death by his parents and his wife. Per his wishes, friends are invited to a joyous celebration of life service, held at the Salem Presbyterian Church, Saturday, Aug. 8, at 2 p.m., following a visitation from 1-2 p.m. Due to the current pandemic, masks will be required and social distancing will be observed at the church. For those unable to attend, a live-stream video system will be established and announced. In lieu of flowers, memorial donations may be made to Salem Presbyterian Church or Feline Friends Chicago, who are fostering his beloved cat Ella (please contact a family member for information to make a memorial).

Edward Boyd, 84, of Salem, passed away Friday, July 24, 2020 at Doctors&#8217; Nursing and Rehabilitation Center in Salem. Ed was a member of the Salem Presbyterian Church for over 50 years and acted as head of the Building & Grounds committee... View Obituary & Service Information

The family of Edward Lee Boyd created this Life Tributes page to make it easy to share your memories.

Send flowers to the Boyd family.