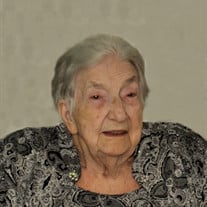 Edna (Carter) Whitt of Effingham, formerly of Farina, passed away at 11:08 a.m. on Saturday, April 24, 2021, at HSHS St. Anthony's Memorial Hospital in Effingham after a lengthy illness, having reached the age of 94 years, 6 months, and 26 days. Edna was born on September 29, 1926, in Shotton Colliery, Durham, England, to William John and Susan (Stephenson) Carter. She was the war bride of Sgt. Arnold A. Whitt, son of Harry and Edna (Jones) Whitt of Farina, and they were married in St. Saviour's Cathedral in Shotton Colliery, Durham, England, on February 26, 1944. She served as a nurse in World War II. She arrived in the United States with their young son, Arnold E. Whitt, aboard the SS Alexander on March 28, 1946. Sgt. Whitt had been shipped back to the states prior to Edna's arrival with their son. Two of her English siblings visited in Farina but she never had the opportunity to return to her homeland. Edna was a faithful member of the First Southern Baptist Church in Farina and helped regularly in Vacation Bible School and other programs in the church. She was a member of the Farina American Legion Auxiliary where she held several offices and served whenever a need arose. She served as the distributor of the Commodity Supplemental Food Program for several years, was in charge of the Clothes Closet at the Baptist Church, and was in charge of Caring and Sharing for the school district. She was also highly involved with the church senior dinners held monthly where after dinner the ladies made lap robes to be taken to area nursing homes. She was a seamstress for her children and made numerous costumes for school musicals for them as well as other students. She was a doting mother, grandmother, and great-grandmother always putting the needs of others ahead of herself. Quilts were another of Edna's specialties and made many for her children and grandchildren. She was owner and operator of Busy Bees Ceramics and made, painted, and fired many beautiful works of art, including a large 13 piece nativity set which she gave to the Baptist Church and was painted by a few helpers in the church prior to 1995. It is displayed annually in the church sanctuary for all to enjoy. Edna is survived by her children, Arnold (Donna) Whitt of Flora, Ralph Whitt of Farina, David (Dianne) Whitt of Stewardson, Edna Eileen (Ronald) Huelsmann of Breese, Michael (Janice) Whitt of Pinckneyville, Jean Alwardt of Farina, and Jenni (Alan) Heiens of Farina; daughter-in-law, Kate Whitt of Merrill, Wisconsin; 14 grandchildren, Michelle (Greg) Galbraith, Edward Whitt, Amanda (Robert) Schmidtke, Sara (Dusty) Meunier, Alan (Karen) Whitt, Julie (Barry) Hodges, Dr. Justin (Amy) Whitt, Sabrina Whitt, Jacelyn (Fred) Kunzeman, Debra Walters, Amy Huelsmann, Zach Heimrich, Oceana (Tyler) Whitt-Gillett, and Dakota Russell; 16 great-grandchildren; 3 step grandchildren; 2 step great-grandchildren; and several nieces and nephews. Edna was preceded in death by her husband; parents; parents-in-law; son, Donald Whitt; daughter, Elizabeth Whitt; daughter-in-law, Kathleen Whitt; son-in-law, Orville Alwardt; grandson, Brandon Whitt; and all 5 of her siblings, Susan (Carter) Laverick, Gladys (Carter) Jones, Eliza (Carter) Laverick, Alfred "Alf" Carter, and William John Carter. Visitation will be held at the First Southern Baptist Church in Farina on Thursday, April 29, 2021, from 9 to 11 a.m. with the funeral to follow. Jimmie Page will be in charge of the funeral and Michael Whitt is in charge of the graveside service. Chloteen Page and Kathy Byers will be in charge of the music. Burial will be in the Farina Cemetery in Farina. Memorials may be given to the First Southern Baptist Church or Caring and Sharing and will be accepted at the Sutherland-Rankin Funeral Home 310 North Broadway/ P.O. Box 97 Salem, Illinois 62881, (618)548-1234, who is honored to be of service to the Whitt Family. Online condolences may be made to the family by visiting www.sutherlandfunerlahome.com.

Edna (Carter) Whitt of Effingham, formerly of Farina, passed away at 11:08 a.m. on Saturday, April 24, 2021, at HSHS St. Anthony's Memorial Hospital in Effingham after a lengthy illness, having reached the age of 94 years, 6 months, and 26 days.... View Obituary & Service Information

The family of Ms. Edna Whitt created this Life Tributes page to make it easy to share your memories.

Send flowers to the Whitt family.