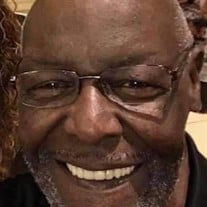 Dwaine Dion Jones, 69, of Centralia, passed away Tuesday, July 27, 2021. He was born April 23, 1952 in Centralia, the son of Simon Franklin and Marion Jones. He married Carolyn Jones on September 23, 1979 and she preceded him in death on May 17, 2003. Dwaine is survived by his daughter, Jennifer Wilson and husband Billy of Missouri; two grandsons: Liam and Jack Wilson both of Missouri; four brothers: Larry Jones and wife Suzette of Illinois, Robert Bibbs of Arizona, Daniel Franklin of Florida, and Charles Baker and wife Cambryn of Illinois; three sisters: Linda Sue Edmond of Illinois, Cynthia Jones Boyd of Illinois, and Nina Garrett of Florida; several nieces and nephews. Dwaine was preceded in death by his parents: Marion Jones and Simon Franklin, stepmother: Ellen (Bibbs) Franklin, three brothers: Carl Franklin Givers, Cleve Jones and Doug Taylor, and grandparents: Lerlean Vaughn and Lonnie O’Neal. Dwaine lived his whole in Centralia. He was a graduate of Centralia High School, where he was a member of the 1970 undefeated CHS Football Team. He graduated from Kaskaskia College with his Associate of Applied Science Degree. Dwaine worked for Beelman Trucking Company for several years until his retirement in 2015. He was also a Certified Drone Pilot and Licensed Auctioneer. Dwaine was a member of the Central City Baptist Church. He loved computers and anything to do with technology. He also enjoyed playing poker and he even won Rookie of the Year in his club in 2010. Most of all, Dwaine loved spending time with his grandsons, Liam and Jack. Per Dwaine’s wishes, cremation rites will be accorded and a Private Family Service will be held at a later date at Hillcrest Memorial Park in Centralia. Due to COVID19, the family asks that there be no in person visits. Please feel free to call, text, Facebook, send cards, condolences and memorial donations to the College Fund for Liam and Jack Wilson (Dwaine’s grandsons) to the Sutherland-Garnier Funeral Home at 235 North Sycamore Street Centralia, Illinois 62801, (618)532-3523, who is honored to be of service to the Jones Family. Friends may leave online condolences to the family by visiting www.sutherlandfuneralhome.com and the Sutherland-Garnier Funeral Home Facebook Page.

Dwaine Dion Jones, 69, of Centralia, passed away Tuesday, July 27, 2021. He was born April 23, 1952 in Centralia, the son of Simon Franklin and Marion Jones. He married Carolyn Jones on September 23, 1979 and she preceded him in death on May... View Obituary & Service Information

The family of Dwaine Dion Jones created this Life Tributes page to make it easy to share your memories.