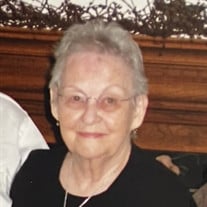 Dreka M. Reed, 99, passed away at 9:50 a.m. Saturday, April 9, 2022 at home. She was born December 7, 1922, the daughter of Jesse and Zetta (Brown) Ford. She married John M. Reed on December 30, 1940, and he preceded her in death on January 21, 2009. Mrs. Reed is survived by three children: daughter, Karen Jackson of Centralia; son, John Reed of Texas; and daughter, Kathy Greenlee (Steve) of Centralia; her grandchildren: Todd Jackson, Kristi Minnix, Steve Jackson (Jeannine) all of Centralia, Blaine Reed (Beth) of Chicago, Rachel Beard of Texas, Jesse Greenlee (Shannon) of Colorado, Nick Greenlee of Centralia. She was also survived by 7 great grandchildren, and 7 great, great grandchildren, and nieces and nephews. Mrs. Reed was a member of the 161 Church of Christ in Centralia. She was an avid St. Louis Cardinal and Blues fan. She enjoyed making quilts, knitting, crocheting, doing seamstress work and tailoring. Mrs. Reed helped organize the First Chapter of M.A.D.D. She cherished the time she spent with her family and friends. In addition to her husband, she was preceded in death by her parents; two sons, Jeff Reed and Jerome Reed; brother, Virgil Ford; sister, Lucille Altadonna; Son-in-Law, Robert Jackson; daughter-in-law, Marilyn Reed and great granddaughter, Justi Jackson. Per Mrs. Reed’s wishes, cremation rites will be accorded and a Private Family Graveside Service will be held at a later date. In lieu of flowers, memorial donations may be made to the Centralia Animal Shelter and will be accepted at the Sutherland-Garnier Funeral Home and Cremation Services at 235 North Sycamore Street Centralia, Illinois 62801, (618)532-3523, who is honored to be of service to the Reed Family. Online condolences may be made to the family by visiting www.sutherlandfuneralhome.com and the Sutherland-Garnier Funeral Home Facebook Page.

The family of Dreka M. Reed created this Life Tributes page to make it easy to share your memories.

Send flowers to the Reed family.