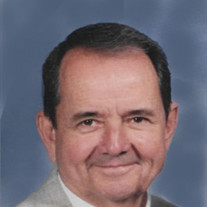 Donald Gene Verhines Sr, age 93 of Woodlawn went home to be with Jesus at 12:15am on Sept 22, 2020 at his home. He was born on August 7th, 1927 in Chicago. He was the son of the late Robert Carter Verhines and Marie (Bartlett) Verhines. He married Shirley (Moseley) Verhines on March 3rd, 1959 in Miami/Hiahleah Florida at First Baptist Church. In addition to his loving wife of nearly 62 years, Mr. Verhines is survived by his 6 children. Three sons: Don Verhines Jr and wife Nancy of Woodlawn, Bob Verhines of Mt Vernon, Bill Verhines of Pennsylvania. Three daughters; Donna Chadbourne and husband Scott of Iuka. Nancy Flick and husband Dale of Nashville , Linda Scoville and husband Steve of Tierra Verde, Florida. He is also survived by 12 grandchildren; Jaclyn, Steven; Bronson, Dawson, Kinzie; Sydney, Sadie, Sophie; Miriam; Jeremy, Rebecca, Jacob. He is survived by 13 great grand children. He is also survived by his sister Mary Wheeler of Springfield and numerous beloved nieces, nephews, cousins, and life long friends. In addition to his parents, he was preceded in death by his brother Robert Dean Verhines of DeKalb. Don was a loving family man. His family and extended family were a large part of his life. He was involved in every aspect of his kids and grandkids lives. He had many kids and grandkids, but had the gift of making each one feel as if they were the only one. He loved following their extracurricular activities and attending all of their games and events. He attended Springfield High School and Antelope Community College. He enlisted in the Navy at age 17 and was a World War II veteran. He was aboard the USS LSMR 408 during World War 2. He was a life long motorcycle and racing enthusiast and raced professionally. His racing numbers were 93P and 119P. Motorcycles were a passion in his life. He owned and rode numerous bikes throughout the years. It was said by many that he had more motorcycle knowledge than anyone they knew. He particularly followed the Moto GP circuit. He traveled extensively for pleasure and also to attend live MotoGP races at the Inaugural Indianapolis MotoGP, Laguna Seca MotoGP, and LeMans France. He worked as a firefighter while living in Miami. Later he was employed as Fire and Safety Chief for guided missile ranges in the Marshall Islands, St Lucia, and Grand Bahama Islands. After moving to Mt Vernon in 1963, he owned Teachers Supply Company in Mt Vernon and also worked for Centralia Cartage, ATL, and ANR in Centralia. Per Don's wishes, cremation rites will be accorded and a public service will be held at a later date. In lieu of flowers, memorial donations in Don's memory may be made to the Sydney Scoville Pancreas/Medical fund and will be accepted by the Sutherland-Garnier Funeral Home at 235 North Sycamore Street in Centralia, IL 62801 (618) 532-3523, who is honored to be of service to the Verhines family. Online condolences may be made to the family by visiting www.sutherlandfuneralhome.com or the Funeral Home's Facebook Page.

Donald Gene Verhines Sr, age 93 of Woodlawn went home to be with Jesus at 12:15am on Sept 22, 2020 at his home. He was born on August 7th, 1927 in Chicago. He was the son of the late Robert Carter Verhines and Marie (Bartlett) Verhines. He... View Obituary & Service Information

The family of Donald G. Verhines, Sr. created this Life Tributes page to make it easy to share your memories.

Donald Gene Verhines Sr, age 93 of Woodlawn went home to be with...

Send flowers to the Verhines family.