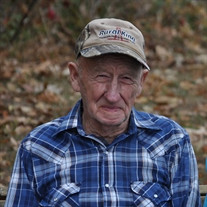 Donald G. McCarty, 90, of Kinmundy, IL passed away November 9, 2021 at Salem Township Hospital with his loving family at his side. Born October 16, 1931 in Kinmundy, he was the son of Glen and Hazel (Plowman) McCarty. A farmer, he also served as road commissioner. He loved anything to do with farming, raising cattle, and enjoyed going to auctions dealing with tractors and farming. He also worked for Howell Pavement in Central City, Illinois. A veteran of the Korean War, he served faithfully in the U. S. Army. He married Shirley Followell, July 22, 1952 in Leakville, Mississippi and she preceded him in death in January 12, 2016. Surviving are his children, Stanley McCarty and wife Kristy of Mt. Vernon, IL, Brad McCarty and wife Misty of Kinmundy, IL, June Showalter and husband Gary of Dix, IL, along with grandchildren Kent Neal, Carrel Randol, Shelby McCarty, Cody Johnson, and great grandchildren Haedyn, Peyton and Rowan. Also left to mourn his passing is his brother, Darrell McCarty of Kinmundy, IL, a sister Loretta Folkert of Cissna Park, IL, and brother-in-law and wife, Ron and "Pudge" Followell of Effingham, IL. In addition to his wife and parents, he is preceded in death by a brother Jerry McCarty and sister Imogene Pinnell. Funeral services will be 1:00 pm Friday at the Sutherland - Rankin Funeral Home in Salem. Visiting hours will be from 12:00 o'clock noon until the funeral hour. Burial will follow at Gray Cemetery, Kinmundy, IL with military honors accorded at the grave. Memorials may be made to the Donor's choice and will be received by the Sutherland - Rankin Funeral Home, 310 N. Broadway, P.O. Box 97, Salem, IL 62881, entrusted with the family's care. On line condolences may be left at sutherlandfuneralhome.com.

Donald G. McCarty, 90, of Kinmundy, IL passed away November 9, 2021 at Salem Township Hospital with his loving family at his side. Born October 16, 1931 in Kinmundy, he was the son of Glen and Hazel (Plowman) McCarty. A farmer, he... View Obituary & Service Information

The family of Donald Gene McCarty created this Life Tributes page to make it easy to share your memories.

Send flowers to the McCarty family.