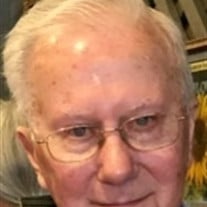 Donald Ray Kelly, 96 years old, passed away on Wednesday, November 3, 2021. Our Father was born December 23, 1924 in Centralia, Illinois. He was the son of Mabel (Petrea) Kelly and David Soloman Kelly of Centralia. Dad and our mother, Beverly (Mickey) Finn Kelly were married November 23, 1946. Our mother preceded Dad in death by 100 days. Dad had one sibling, Marion Kelly Arndt, and she preceded him in death also. Survivors are: Son, Dan Kelly and wife Marsha of Chicago; daughter, Kandice Kelly Fischer of Centralia; also surviving are five grandchildren and seven great-grandchildren: Mrs. Jenifer Simone and husband Jeff, Alexandra, Samuel and Lily Grace of Raleigh, N.C., Jason James and wife Nicole, Alyssa of Knoxville, TN, Gavin James of Murray, Kentucky, Ava and Jayce of Ogden, Utah, Nicholas James and wife Deonna of Lenoir City, TN, Ms. Karena Kelly Kidder and husband Brian, daughter: Charlotte of Chicago, Illinois, and Dr. Tanika Kelly-Laverde and Husband Nick of New Orleans, La. and children Haley and Mathew. Our father graduated from Centralia High School and immediately enlisted in the United States Marine Corps. He participated in the Treasury Bougainville Operation, The Bismarck Archipelago Operation and the Consolidation of the Northern Soloman Islands in the early 1940's. Dad was called back to the USMC in 1948 for the Korean Conflict and was discharged in 1952. Our Father coached Baseball in the Centralia Community for many years. He was an avid Chicago Cub Fan. He also was a Blacksmith at the Illinois Central Railroad for his entire working life of 40 plus years. Our Father loved to dance with our mother. They were a well oiled machine on the dance floor and in their life together. Our Father never met a dog he didn't like. We will lay our Father to rest Eternally next to Our Mother, with joy for a life well lived and grief for the loss of this couple we were graced to have in our lives for so long. A Graveside Service for Donald Kelly will be held Monday, November 8, 2021 at 12:00 PM at the Elmwood Cemetery in Centralia with Father Steven Pautler officiating. Military Honors will be accorded at the gravesite by the Centralia American Legion Post 446 and the Centralia V.F.W. Post 2055. Since Our Father had such a love for dogs and animals alike, if it pleases you, in lieu of flowers, you may donate to the Centralia Humane Society and will be accepted at the Sutherland-Garnier Funeral Home at 235 North Sycamore Street Centralia, Illinois 62801, (618)532-3523, who is honored to be of service to the Kelly Family. Online condolences may be made to the family by visiting www.sutherlandfuneralhome.com and the Sutherland-Garnier Funeral Home Facebook Page.

Donald Ray Kelly, 96 years old, passed away on Wednesday, November 3, 2021. Our Father was born December 23, 1924 in Centralia, Illinois. He was the son of Mabel (Petrea) Kelly and David Soloman Kelly of Centralia. Dad and our mother, Beverly... View Obituary & Service Information

The family of Donald Ray Kelly created this Life Tributes page to make it easy to share your memories.

Send flowers to the Kelly family.