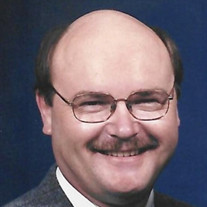 Donald Dreas, 74, of Walnut Hill, passed away Friday, February 5, 2021 at his home. He was born August 6, 1946 in Scheller, the son of Roman Dreas and Clara C. (Kabat) Dreas. He married Clara E. Smith on July 27, 1974 at St. Bruno’s Catholic Church in Pinckneyville and she preceded him in death on November 9, 2010 after 36 years of marriage. Donald is survived by his two daughters: Renee Gerdes and husband Alan of Bartelso and Melissa Dreas and husband Curtis Doetsch of Collinsville; five grandchildren: Jordon Nowitzke, Clara Gerdes, and Katherine Gerdes all of Bartelso, and Henry Doetsch and Eliot Doetsch both of Collinsville; a brother: Dennis Dreas of Ashley; a brother-in-law: Patrick Smith of Herrin; three sisters-in-law: Joan Baumer and husband Mike of Bryon, Illinois, Bernadette Hanson and husband Bob of Diamondhead, Mississippi, and Mary Dreas of Radom; several nieces and nephews; and his four-legged companion: Bear. Donald was preceded in death by his parents: Roman and Clara C. Dreas, wife: Clara E. Dreas, and father and mother-in-law: Severin and Leona Smith. Donald was a member of St. Mary Church in Centralia. He was also a lifetime member of the Knights of Columbus and, also served as a Eucharistic Minister. Donald loved the time he spent with his grandchildren and family. He also enjoyed traveling with his brother-in-law and his four-legged companion, Bear. He even enjoyed sitting at home scratching lottery tickets. Mass of Christian Burial for Donald Dreas will be held Thursday, February 11, 2021 at 11:00 AM at St. Mary Catholic Church in Centralia with Father Andy Knopik officiating. Burial will follow at the Calvary Cemetery in Centralia. Visitation will be held Thursday morning from 9:00 AM until the time for Mass at the church and due to the health guidelines, everyone is required to wear a mask and social distance. For those who would like to view the Mass live, please visit St. Mary Church Facebook Page at 11:00 AM. In lieu of flowers, memorial donations may be made to St. Mary School and will be accepted at the Sutherland-Garnier Funeral Home and Cremation Services at 235 North Sycamore Street Centralia, Illinois 62801, (618)532-3523, who is honored to be of service to the Dreas Family. Online condolences may be made to the family by visiting www.sutherlandfuneralhome.com and the Sutherland-Garnier Funeral Home Facebook Page.

The family of Donald R Dreas created this Life Tributes page to make it easy to share your memories.

Send flowers to the Dreas family.