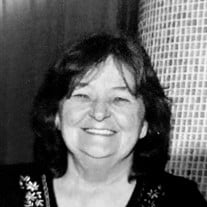 Dolores Fay Reed, 75, of Centralia, passed away Saturday, January 30, 2021 at her home surrounded by her family. Dolores was born December 16, 1945 in Cape Girardeau, MO, the daughter of Jesse Warren Carnell and Valta (Campbell) Littrell. She married Danny Gayle Reed on February 11, 1965 in Centralia and he preceded her in death on February 11, 2004 after 39 years of marriage. Dolores is survived by five children: Danny Gayle Reed Jr. and wife Melissa of Centralia, Diana Dawn "Dee Dee" Taintor and husband Loren of Centralia, David Warren Reed of Centralia, Dennis Jason Reed of Kell, and December Lynn Hunt and husband Trenton of Trenton, IL; Fifteen grandchildren: Samantha Le Walton, Sahanan Raquel Reed, Cyndi Gayle Donsbach, Danny Gayle Reed III, Tashia Cheves, Danielle Farley, Dakota James Reed, David Warren Reed Jr., Devin Gayle Reed, Deacon Dennis Reed, Ryan Andrew Reed, Cameron Chaise Reed, Hannah Joline Reed, Natalie Elise Reed, Ahlivia Paige Reed; eight great-grandchildren; two brothers: Dennis Littrell of Centralia, and Doug Littrell and wife Lisa of Iuka; two sisters: Debbie Finley and husband Anthony "Tony" of Centralia, and Donna Rippy and husband Robert of Junction City; special niece and nephew: Laura Pokojski and John Brown and many more loving nieces and nephews. Dolores was preceded in death by her parents: Jesse Warren Carnell and Valta Littrell; husband: Danny Gale Reed; step-father: Robert Littrell; granddaughter: Robin Meadows Reed; grandson: Donté Rush; and a sister: Dianne Hendricks-Nichols. Anyone who knew Dolores knew she was the kindest, wisest, wittiest, craftiest, most loving and forgiving Elvis adoring women you have ever met. Elvis wrote "I guess I'll never know the reason why you love me like you do. That’s the wonder, the wonder of you." Describing her so perfectly. She always saw the good in people. No matter what, she would find the beauty inside you and before leaving you would feel that beauty too. She had a gift of lifting people up, making them feel confident, welcomed, and so loved. For many years she defied the odds against her over and over and over again. We joked she had 9 lives, though it was more like 100. She was always so positive. She was tough and strong willed, a real fighter. Now she can rest, pain free and at peace. There is beauty in death. Beauty in leaving earth side and reuniting with those who have passed on. The greatest love story finally has an ending, nearly 17 years ago the love of her life said he would wait for her at the gates, and there is no doubt that that is exactly what happened. She will be deeply missed by everyone here but to know she is once again in his arms gives me the hope and consolation and strength to carry on. A Celebration of Life Service will be held Thursday, February 11, 2021 at 6:00 p.m. at the Sutherland-Garnier Funeral Home in Centralia. A visitation will be held from 4:00 p.m. to 6:00 p.m. at the Funeral Home on Thursday, February 11, 2021. For those in attendance, masks and social distancing will be observed and with a limited amount of people entering the Funeral Home at one time. In memory of Dolores, memorial donations may be made to the family and will be accepted by the Sutherland-Garnier Funeral Home at 235 North Sycamore Street in Centralia, IL 62801 and by calling (618) 532-3523, who is honored to be of service to the Reed family. Online condolences may be made to the family by visiting www.sutherlandfuneralhome.com or the Funeral Home's Facebook page.

Dolores Fay Reed, 75, of Centralia, passed away Saturday, January 30, 2021 at her home surrounded by her family. Dolores was born December 16, 1945 in Cape Girardeau, MO, the daughter of Jesse Warren Carnell and Valta (Campbell) Littrell. She... View Obituary & Service Information

The family of Dolores Fay Reed created this Life Tributes page to make it easy to share your memories.

Send flowers to the Reed family.