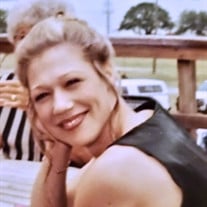 Denise Dulaney, 54 of Salem, Illinois passed away March 7, 2022 at her home. Born May 20, 1967 in Austin, Texas, she was the daughter of Franklin and Mary (Zieger) Morgan. She was married April 10, 1994 to Daniel M. Dulaney in Iuka, Illinois. He preceded her in death February 4, 2008. Survivors include her mother, Mary Morgan of Salado, TX, her children, Michael (Blair Monroe) Dulaney of Salem, IL, Patrick Dulaney of Salem, IL, Daniel (Paije) Dulaney of LaClede, IL, Jubal Dulaney of Salem, IL and Nicole Dulaney of Kinmundy, IL. and 12 grandchildren. Also left to mourn her passing are her sisters, Nila (Steve) Glimp of Texas, Jennifer (Mark) Wright of Oklahoma and Amanda (Scottie) Dockray of Texas. In addition to her husband, she was preceded in death by her father. The family invite you to join them at Martin Cemetery, 2:00 pm Friday, March 18, 2022 for graveside services. There will be no public visitation. Memorials may be made to the Donor's choice and will be accepted by the Sutherland - Rankin Funeral Home, P.O. Box 97, 310 N. Broadway, Salem, IL 628981, entrusted with the family's care. On line condolences may be sent to sutherlandfuneralhome.com.

The family of Ms. Denise Elizabeth Dulaney created this Life Tributes page to make it easy to share your memories.

Send flowers to the Dulaney family.