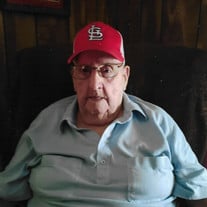 Delmer M. “Duke” Aldrich, 91, of Centralia, passed away Saturday, March 12, 2022 at 9:54 pm at Barnes-Jewish Hospital in St. Louis, Missouri. He was born January 10, 1931 in Centralia, the son of Dempsey and Carrie (Ball) Aldrich. He married Florence M. Wilkerson on October 17, 1954 and she preceded him in death on October 7, 2003. Delmer is survived by his daughter: Susan K. Aldrich and son: Brian M. Aldrich both of Centralia; he is also survived by a brother-in-law: David L. Hanks of Sandoval; and many nieces, nephews, great-nieces, and great-nephews, who loved their Uncle Duke as much as he loved and adored them. He was preceded in death by his parents: Dempsey and Carrie Aldrich, wife: Florence Aldrich, 10 brothers and 1 sister: Russell Aldrich, Ervin (Joe) Aldrich, Harry Aldirch, Katherine Yarbrough, Edger (Eck) Aldrich, Roy Lee (Buck) Aldrich, Richard Aldrich, James Aldrich, Jess (Jay) Aldrich, Leslie Aldrich, and John Aldrich, two sisters-in-law: Alice Hanks and Betty Williams and husband Victor, and two brothers-in-law: Bill Wilkerson and wife Maxine and Harold Wilkerson and wife Norma. Delmer worked in construction for many years. He helped build St. Mary’s Hospital and Warren G. Murray Center in Centralia. He was an avid St. Louis Cardinals Fan and he enjoyed watching western movies and country music shows. Funeral Services for Delmer M. “Duke” Aldrich will be held Friday, March 18, 2022 at 2:00 PM at the Hillcrest Lakeside Chapel in Centralia with Pastor Jonathan Urshan officiating. Burial will follow at Hillcrest Memorial Park in Centralia. Visitation will be held Friday afternoon from 12:00 PM until the time of service at the chapel. In lieu of flowers, memorial donations may be made the First Apostolic Church and will be accepted at the Sutherland-Garnier Funeral Home at235 North Sycamore Street Centralia, Illinois 62801, (618)532-3523, who is honored to be of service to the Aldrich Family. Online condolences may be made to the family by visiting www.sutherlandfuneralhome.com and the Sutherland-Garnier Funeral Home Facebook.

The family of Delmer "Duke" Aldrich created this Life Tributes page to make it easy to share your memories.

Send flowers to the Aldrich family.