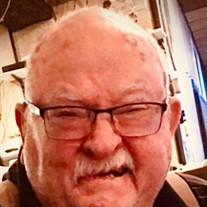 Dean A. Pearce, 87, of Centralia, passed away on Thursday, November 11, 2021 at SSM Good Samaritan Hospital in Mt. Vernon. Dean was born November 9, 1934 in Argonia, KS, the son of Elijah Green Pearce and Madge M. (Conn) Pearce. He married Carolyn Sue (Self) Pearce on May 27, 1961 and she preceded him in death on June 17, 1992. He was then introduced to his current wife Kathy (Harland) Pearce by his sister-in-law Genie Brown. He married Kathy on March 1, 1994 in Irvington and she survives him in Centralia. In addition to his wife Kathy, Dean is survived by his three children: Dale Pearce and wife Lora Lee of Patoka, Terra Shreve and husband Kenneth of West Frankfort, and Amy Shreve and husband Tim of Centralia; seven grandchildren: Olivia Pearce, Bella Pearce, Zachary Shreve, Eric Shreve, Bryan Shreve, Meghan Shreve, and Jordan Shreve; six great-grandchildren: Matilyn Pearce, Serenity Shreve, Kaleena Peace, Journey Holstlaw, Berkleigh Pearce, and Beau Mueller; sisters-in-law: Genie Brown of Nevada, Grace Mundell of Kentucky, Barbara Pearce of Kansas, Barb Pearce of Texas, Vivian Pearce of Kansas, and Debbie Gerdes of Sandwich, Illinois; and multiple nieces and nephews. Dean was preceded in death by his parents Elijah and Madge Pearce, his first wife Carolyn Sue Pearce, siblings: Merle Pearce and wife Dot. David Pearce, Denzel Pearce, Derrell Pearce, Alice Phillippi and husband Dean, Doris Kuykendall and husband Raymond, Joy Kosydar and husband Ted, and his twin infant brother. Dean grew up on a farm in Kansas. He briefly worked in the oil fields and a boat factory in Kansas. Shortly after he married Carolyn Sue, they moved to Irvington in 1967 where he worked at BergenBuild in Junction City until it closed. He then became a correctional officer in Centralia and worked there until he retired in 1999. He was blessed to have not one but two long successful marriages in his life. He was a member of the Elks. He was an avid reader and loved to read science fiction. In his younger years, he enjoyed fishing and hunting rabbits. He will be dearly missed by those that knew him. A memorial service for Dean Pearce will be held on Monday, November 15, 2021 at 12:00 p.m. at the Sutherland-Garnier Funeral Home in Centralia with Pastor Sydney Davis, Jr. officiating. Visitation will be held Monday, November 15, 2021 from 10:00 a.m. till 12:00 p.m. at the funeral home. Memorial donations can be made to St. Jude Children's Research Hospital and can be accepted at Sutherland-Garnier Funeral Home and Cremation Services at 235 North Sycamore Street Centralia, Illinois 62801, 618-532-3523, who is honored to be of service to the Pearce Family. Online condolences may be made to the family by visiting www.sutherlandfuneralhome.com.

The family of Dean A. Pearce created this Life Tributes page to make it easy to share your memories.

Dean A. Pearce, 87, of Centralia, passed away on Thursday, November...

Send flowers to the Pearce family.