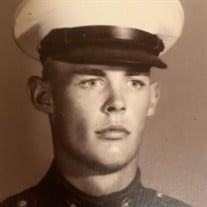 David McNeal 73, passed away at Spring Valley Hospital in Las Vegas on March 9, 2022. Son of the late Opal and Fred Greathouse. He was born on August 10, 1948 in Centralia, Illinois at Saint Mary’s hospital. He graduated from Centralia High School in 1968. David served as a special forces combat Marine during the Vietnam War where he achieved the rank of Corporal. He was a decorated Veteran including three purple hearts. He worked in the chemical field and as a National Service Officer in Chicago, Illinois for the VFW and the Purple Heart. He is survived by his wife Carol McNeal, his daughter Tammy Toby and husband Steve from London, Kentucky, his son Shawn McNeal and wife Angela from Hebron, Illinois, a brother Ted McNeal and wife Helen from Springfield, Kentucky, ten Grandchildren Chelsea, Casey, Amos, Abigail, Natanya, Ethan, Chaya, Isaac, Enoch & Solomon, two Great Grandchildren Atticus and Abraham & two nieces Angie Hoyler & Michelle McNeal. David was preceded in death by his parents Fred and Opal Jolliff Greathouse. After retiring, he and his wife Carol of 51 years moved to Pahrump, Nevada. He was an active member of the VFW and he was also a member of a Riders Group where he earned the legendary nickname Mad Dog. He enjoyed the final years of his life riding his Harley Davidson trike, target shooting, & enjoying the beauty of the West with friends and family. He will be greatly missed. His funeral will be held in Boulder City, Nevada at the Southern Nevada Memorial Cemetery June 1st at 8:40 am. There will also be a Celebration of Life at the VFW in Pahrump, Nevada June 2nd at 5:30pm. All friends and family are invited. Memorial donations can be made to the American Cancer Society or Disabled American Veterans and can be accepted at Sutherland-Garnier Funeral Home at 235 North Sycamore Street Centralia, Illinois 62801, (618)532-3523, who is honored to be of service to the McNeal Family. Online condolences may be made to the family by visiting www.sutherlandfuneralhome.com and the Sutherland-Garnier Funeral Home Facebook Page.

David McNeal 73, passed away at Spring Valley Hospital in Las Vegas on March 9, 2022. Son of the late Opal and Fred Greathouse. He was born on August 10, 1948 in Centralia, Illinois at Saint Mary&#8217;s hospital. He graduated from Centralia... View Obituary & Service Information

The family of David McNeal created this Life Tributes page to make it easy to share your memories.

David McNeal 73, passed away at Spring Valley Hospital in Las...

Send flowers to the McNeal family.