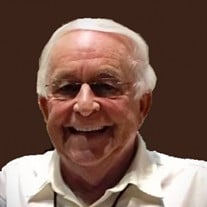 Danny G. Griffin, 78, of Centralia passed away at 10:22 pm on Friday, February 26, 2021 at SSM Health St. Mary's Hospital in Centralia. He was born February 11, 1943 in Centralia, son of Herman and Ruth (Dieckmann) Griffin. He married Yvonne Anderson on March 21, 1964 at the First Methodist Church in Centralia. She preceded him in death on January 26, 2021. Mr. Griffin is survived by two children, Lisa Gail Griffin of Centralia, and James Blake Griffin and wife Lori of Centralia; two grandchildren, Bradley James Griffin, and Lane Anderson Griffin of Centralia. He was preceded in death by his parents and wife. Mr. Griffin attended Irving School and Centralia Township High School. He Graduated Central Illinois Barber College in 1962, and worked at Red's Barber Shop while attending Kaskaskia College, where he graduated with an Associate of Arts Degree. He received a Bachelors Degree in Education from Greenville College, a Masters Degree in Educational Administration, and a Specialist Certificate in Educational Administration from Southern Illinois University. He taught at Irving School, Centralia High School, served as Principal of Central School and was the first Assistant Principal of Centralia Junior High in 1976. He served as Superintendent of Kell School District for 11 years, Superintendent of Central City School District for 3 years, and completed 11 y ears as Superintendent of Centralia City Schools District prior to his retirement. He served as a trainer in the Illinois Administrator's Academy in the 1980's. Mr. Griffin earned the rank of Eagle Scout in Troop 251. He sang in the Spokesmen Quartet in high school, and later with the Howe Quartet from Irvington. He was an avid Gospel music fan. He was a long time member of the Elks, and the Centralia Masonic Lodge 201, as well as the Noon Rotary where he served as President in 1996-97. He was a 32nd Degree Mason. He served on the Centralia Foundations Board and various local committees. He was presented with the "Reach for the Stars' award by the Centralia City Schools. Mr. Griffin enjoyed coin and stamp collecting. He and his son Blake have owned and operated Centralia Coin, Stamp, Etc. for over 30 years. Mr. Griffin often spoke of his greatest blessing being his family and friends. He spent most of his time with family and especially enjoying his two grandsons Bradley and Lane with their school and sports activities. Funeral Services will be held at 11:00 AM on Saturday, March 6, 2021 at the Sutherland-Garnier Funeral Home in Centralia with Rev. John Willis officiating. Interment will follow at Hillcrest Memorial Park in Centralia. Friends may call Friday, March 5, 2021 from 5:00 PM to 7:00 PM at the funeral home. Due to the health guidelines, masks must be worn; social distancing will take place, and a limit of 50 attendees at a time for the visitation and service. Memorials may be made to the Centralia Foundation, or the Centralia City Schools Endowment Fund and will be accepted at the Sutherland-Garnier Funeral Home at 235 North Sycamore Street Centralia, Illinois 62801, (618)532-3523, who is honored to be of service to the Griffin Family. Online condolences may be made to the family by visiting www.sutherlandfuneralhome.com and the Facebook Page.

Danny G. Griffin, 78, of Centralia passed away at 10:22 pm on Friday, February 26, 2021 at SSM Health St. Mary's Hospital in Centralia. He was born February 11, 1943 in Centralia, son of Herman and Ruth (Dieckmann) Griffin. He married Yvonne... View Obituary & Service Information

The family of Danny G. Griffin created this Life Tributes page to make it easy to share your memories.

Send flowers to the Griffin family.