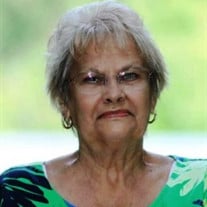 Colleen Mayfield Sanders, 89, of Centralia, passed away Tuesday, December 22, 2020 at Centralia Manor Nursing Home in Centralia. She was born October 18, 1931 in Centralia, the daughter of Dale Simcox and Lola Pauline (Cole) Simcox, and they preceded her in death. She was a 1949 graduate of Sandoval High School. She married Billie Joe Mayfield in 1950 and he preceded her in death on October 14, 1982. Colleen later married Dwight “June” Sanders in 1992 and he preceded her in death on June 18, 2013. She was also preceded in death by a granddaughter (Sherri Mayfield) and a great grandson (Riley Miller). Colleen is survived by her six children Mark (Diana) Mayfield of Jacksonville, IL, Jeanne (Ralph) Bickham of Jacksonville, FL, Joleen Mayfield of St. Louis, MO, Lori (Jeff) Miller of Hannibal, MO, Brad (Traci) Mayfield of Mesa, AZ, and Brian (Tracy) Mayfield of Huntsville, AL. Also surviving is her sister, Carol (Melvin) Wood of Sandoval, IL, and a cousin, Shirley Griffin of Patoka, IL. Colleen is also survived by twelve grandchildren, and twelve great-grandchildren. Colleen lived many seasons during her life. She was born during the great depression and moved with her family to Gallipolis, OH so her father could find work. As an adult, Colleen lived in Greenwich, CT, Key West, FL, Galesburg, IL, and Mt. Vernon, IL before settling in Centralia, where each of her children graduated from High School. She was the owner of Mayfield Transit, Mayfield Heating & Air, and the Plaster Shack. She was a competitive bridge master, and she found great joy competing throughout southern Illinois with many friends throughout the years. She could commonly be found throughout the community supporting her children and grandchildren at sporting and scholastic events. A Private Family Graveside Service will be held at Hillcrest Memorial Park in Centralia on Wednesday, December 30, 2020. In lieu of flowers, memorial donations may be made to the Heritage Woods Activity Fund and will be accepted at the Sutherland-Garnier Funeral Home and Cremation Services at 235 North Sycamore Street Centralia, Illinois62801, (618)532-3523, who is honored to be of service to Colleen's Family. Online condolences may be made to the family by visiting www.sutherlandfuneralhome.com and the Sutherland-Garnier Funeral Home Facebook Page.

Colleen Mayfield Sanders, 89, of Centralia, passed away Tuesday, December 22, 2020 at Centralia Manor Nursing Home in Centralia. She was born October 18, 1931 in Centralia, the daughter of Dale Simcox and Lola Pauline (Cole) Simcox, and they... View Obituary & Service Information

The family of Colleen Mayfield Sanders created this Life Tributes page to make it easy to share your memories.