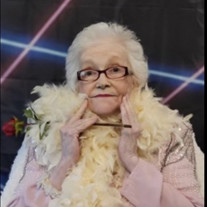 Chonita Lorraine Smith, 82, of Salem, Illinois passed away November 9, 2021 while a patient at Deaconess Midtown Hospital, Evansville, Indiana. Born September 27, 1939 in Salem, she was the daughter of Loren Cope and Mary Alice (Blackburn) McMackin. She was proud to be a descendent of one of the early families in the Salem area through her father. She was a faithful member of St. Thomas Episcopal Church in Salem. Chonita worked for many years in education at Salem Elementary School District #111 from where she retired. She united in marriage with W. Michael DuBois, April 24, 1965 in Salem and he preceded her in death, May 23, 1987. She later married Col. William F. Smith, September 12, 1995 in Salem, and he preceded her in death November 24, 2013. Survivors include her dear friend and faithful caregiver, Leon Chapman of Salem, and her staff and caregivers at The Cottages At Salem. Also, her brother, Dr. Ian McMackin, his wife Lenore and their son Baz Alexander McMackin of Mountain View, CA; a nephew Jamie McMackin and wife Ellen Tulloch McMackin and daughter Caitlin Tulloch of Oakland, CA, along with her step-children Alex Smith-Barbieri and wife Cindy of Bronx, NY, Cheryl Richter and son Kyle Richter of Stamford, CT, Lisa Able and husband Gary of Ft. Laurel, FL and their daughter Andy and husband Mike, also of Florida. Also left to mourn her passing are first cousins Sally Scheretz Roush and family, Columbus, OH, Ellen McMackin Spencer and husband Gerald of Glen Carbon, IL, Mary Belle McMackin and husband John Stygar of Merryville, IL, and their families; a sister-in-law Janie Smith Meeks and husband John of Arlington, TX. In addition to her husbands and parents, she was preceded in death by a brother, Dr. Howard McMackin in 2019. Funeral services will be at 11:00 a.m. . Saturday, November 20, 2021 at St. Thomas Episcopal Church, 512 W. Main St., Salem, IL with Dan Shuler officiating. Visiting hours will be from at 10:00 a.m. until the service hour at the church. Interment beside her husband Col. William F. Smith will take place at a later date at West Point Cemetery, West Point, NY, Memorials may be made to St. Thomas Episcopal Church and left with Sutherland - Rankin Funeral Home, P.O. Box 97, 310 N. Broadway, Salem, IL 62881 (618) 548-1234, entrusted with the family's care.

The family of Chonita Lorraine Smith created this Life Tributes page to make it easy to share your memories.

Send flowers to the Smith family.