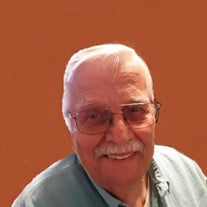 Charles “Chuck” Arlen West, 84, of Centralia passed away at 2:59 a.m. on Friday, January 14, 2022, at SSM Health Good Samaritan Hospital in Mt. Vernon, IL from cardiac arrest. He was born on October 28, 1937, in Chicago, IL, the son of the late Charles Arthur West and Virginia Lee (Helm) West. He was raised in Carlyle, IL and graduated from Carlyle High School with the class of ’56. Chuck was a charter member of Carlyle Baptist Church. He married Judy Smith and they later divorced. He married Lydia (Johnston) Hatfield on Valentine’s Day, February 14, 1982, at Trinity Lutheran Church of Hoffman and she survives him in Centralia. In addition to his wife, Chuck is survived by his son: Charles Alan West and wife Yukiko “Yuki” of Clayton, DE; his daughter: Denise Summers of Belleville, IL; two stepdaughters: Christina Burke and husband Carlos of Casselberry, FL and Teresa Bennett of Janesville, WI; grandchildren: Hanna Summers of Belleville, IL, Charles Aaron West and wife Heather, Johnathan West and fiancé Taylor, Melissa McDonald and husband Shawn all of Louisiana, Thorin West of Oklahoma, Gabriel West and Brandon West of Clayton, DE; step grandchildren: Megan Summers of St. Louis, MO, Kate Summers of O'Fallon, IL, Zane Morgan of Janesville, WI, and Zachary Morgan and significant other Karla of Deforest, WI; four great-grandchildren: Charles Adam West, Lillian Mae West, Kai Tillman and Mila Samson all of Louisiana; step great grandaughter Sunnie Edwards of O'Fallon, Il.; brother -in-law: Ron Johnston and wife Nancy of Centralia; and nieces: Vicki Vaughn and husband Chase of St. Charles, MO and Andrea Quarles and husband Devin of Broomfield, CO; nephews: Daniel West and wife Kathy of Gulf Shores, AL, Daniel Johnston and wife Cindy of St. Joseph, IL, and Jeremy Johnston and wife Amanda of Hoffman, IL; great nephews: Cody Johnston of St. Joseph, IL, Haydn and Logan Johnston of Hoffman, IL and Isaak and Carter Quarles of Broomfield, CO; one great-niece: Elise "Ellie" Johnston of Hoffman, IL. Special friend Kristy Kirgan Grover and family of Lewis Center Ohio. In addition to his parents, Chuck is preceded in death by his half-brother: John West, his daughter: Dana West, and his sister and brother-in-law: Sharon and Richard Krajcovic. Chuck worked 32 years for Valley Industries, but his passion was his hobbies. He was a craftsman with a natural talent to build beautiful knives. He had articles in three knife magazines and traveled the knife circuit winning awards at the knife shows. He once met and talked with Glen Campbell and his sons at a Colorado knife show. He was a mentor to other knife makers, especially to his buddy Larry Kimmel. He had an ear for music. In 1982, he learned to play the bagpipes, joined the John Ford Highland Bagpipe Band in St. Louis, and started the Celtic Pipes and Drums of Southern Band in Centralia. He began using his shop equipment to build bagpipes selling to pipers in Florida and Australia. Much was learned of his Scottish ancestry by travelling with his wife to Scotland twice and to Nova Scotia gathering information of his maternal Watson clan. Many miles were covered pulling his RV across the United States with his wife and two golden retrievers. Two of his favorite states to explore were Texas as a snowbird and then to the mountains of Montana to hike. Chuck was a member of the Centralia Area Historical Society, Moose Family Center, Goshen Trail Longrifles Muzzleloading Club, and a lifetime member of the NRA. A private service will be held at a later date. Burial will follow at Hillcrest Memorial Park. Memorial donations can be made to the Centralia Humane Society, a no kill animal shelter, and will be accepted at Sutherland-Garnier Funeral Home at 235 North Sycamore Street Centralia, Illinois 62801, (618)532-3523, who is honored to be of service to the West Family. Online condolences may be made to the family by visiting www.sutherlandfuneralhome.com and the Sutherland-Garnier Funeral Home Facebook Page.

The family of Charles West created this Life Tributes page to make it easy to share your memories.

Send flowers to the West family.