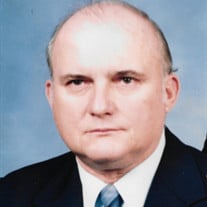 Charles Watson, 86, of Irvington, passed away Sunday, January 3, 2021 at SSM Health St. Mary's Hospital in Centralia. Charles was born June 16, 1934 in Irvington, IL the son of Rev. Guy Watson and Edna (Raines) Watson. He married Joan Patton on June 13, 1981 at the United Methodist Church in Irvington. In addition to his wife Joan of 39 years, Charles is survived by his son Marty Watson and wife Lisa of Iuka; two grandchildren: Stephanie Remer and husband Dave of Woodlawn, and Jessica Koch and husband Jerry of Dix; four great-grandchildren: Emily, Allyssa, Taylor, and James; one cousin: Pauline Raines of Centralia; one niece: Sharon Sensel of O'Fallon; one great-niece: Nicole Hughes and husband Rich. Charles was preceded in death by his parents: Guy and Edna Watson; sister Josephine Lifritz; infant sister: Mary Ann Watson; niece: Sandra Hough; and father and mother-in-law: Helen and Albert Patton. Charles was known for his hard work and dedication working for the Illinois Bell Telephone Company before retiring on June 18, 1993 after 33 years. Charles served in the United States Army. He also liked wood working and made a number of useful objects from his kitchen cabinets to picture frames. Charles and Joan enjoyed traveling and would often go camping for weeks at a time. He also enjoyed gardening. He was of the Methodist Faith and had been a member of the United Methodist Church in Irvington. A visitation for Charles Watson will be held Thursday, January 7, 2021 from 9:00 A.M. to 11:00 A.M at Hillcrest Memorial Park Lakeside Chapel. Due to local health mitigations, only 10 people are allowed to enter the Chapel at time, masks must be worn, and social distancing will be observed. A Private Family Memorial Service will follow with Pastor Karl Barnfield officiating with burial in Hillcrest Memorial Park Cemetery in Centralia with Military Rites. In lieu of flowers, memorial donations may be made in honor of Charles to the Eternity Baptist Church and will be accepted at Sutherland-Garnier Funeral Home and Cremation Services at 235 North Sycamore Street in Centralia (618)532-3523 who is honored to be of service to the Watson Family. Online condolences may be made to the family by visiting www.sutherlandfuneralhome.com and the Sutherland-Garnier Funeral Home Facebook Page.

The family of Charles Martin Watson created this Life Tributes page to make it easy to share your memories.

Send flowers to the Watson family.