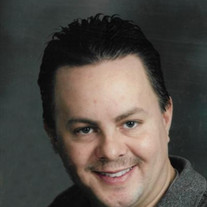 Chad Dustin Ramey, 48, of Centralia, passed away Saturday, November 15, 2020 at his home. Chad was born January 27, 1972 in Biloxi, Mississippi to Larry Ramey and Barbara (O’Dell) Ramey. He married his high school sweetheart and love of his life, Christina Quick, on May 13, 2006, they were together 33 years and she survives in Centralia. In addition to his mother: Barbara Ramey of Biloxi, Mississippi, he is also survived by his wife: Christina Ramey of Centralia; a brother: Tim Ramey and Connie Bryan of Centralia; niece and nephew: Madison and Connor Ramey both of Centralia; sister-in-law: Kathy Collins and husband Michael of Festus, Missouri; brother-in-law: James Quick of Centralia; two nieces: Emma and Maya Quick both of Centralia; mother-in-law: Liselotte “Lilo” Quick of Centralia; several nieces, nephews, aunts, uncles, cousins, and his two fur babies: Dora and Shasha. He was preceded in death by his father, Larry Ramey on February 4, 2011, grandparents: Jack and Delores Ramey, grandmother: Ruth Stahl, father-in-law: Robert Quick, and a fur baby: Diego. Chad served in the U.S. National Guard. He graduated from Kaskaskia College with a Degree in Respiratory Therapy, where he made the Dean’s List and was a member of Phi Theta Kappa. He enjoyed volunteering at the Centralia Humane Society. Chad also enjoyed to golf, watching Football games on TV, traveling and going to the beach with his wife, Christina. He loved the outdoors, family BBQ’s, and spending time with his family, fur babies and friends. Chad had a big heart and helped anyone and everyone. A Private Family Service will be held at a later date with burial to follow at Hillcrest Memorial Park in Centralia. In lieu of flowers, memorial donations may be made to the Leashes of Valor and will be accepted at the Sutherland-Garnier Funeral Home and Cremation Services at 235 North Sycamore Street Centralia, Illinois 62801, (618)532-3523, who is honored to be of service to the Ramey Family. Online condolences may be made to family by visiting www.sutherlandfuneralhome.com and on the Sutherland-Garnier Funeral Home Facebook Page.

The family of Chad D. Ramey created this Life Tributes page to make it easy to share your memories.

Send flowers to the Ramey family.