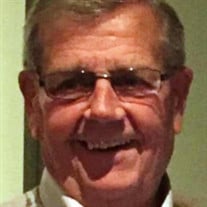 Calvin “Cal” F. Johnson, 80, of Centralia, passed away Sunday, November 29, 2020 at his home. He was born September 11, 1940 in Marion County, the son of Sylvester “Butch” Johnson and Frances (Maroon) Johnson. He married Sandy Weiss on April 21, 1962 and she survives in Centralia. In addition to his wife of 58 years, Sandy Johnson of Centralia, he is also survived by his four children: John Johnson, Nathan Johnson, Susan Peters and husband Jerad, and Carrie Donoho and husband Ronnie all of Centralia; seven grandchildren: Justin Johnson and special friend Jen Phelps of Centralia, Amanda McGrath and husband Phillip of Scott Air Force Base, Derek Donoho and wife Patty of Centralia, Mariah Peters of Centralia, Riley Peters and special friend Jace Swartzlander of Centralia, Walker Johnson and special friend Kloie Biagi, and Austin Johnson and special friend Caelyn Musgrave of Centralia; six great-grandchildren: Willow McGrath, Wyett McGrath, Waverly McGrath, Adaleigh Donoho, Gaige Donoho, and Axell Johnson; three brothers: Don Johnson and wife Becky of Centralia, Bob Johnson of Centralia, and Val Gene Johnson and wife Jackie of Centralia; several nieces and nephews. He was preceded in death by his parents, a brother: Jack Johnson and sister-in-law: Mary Johnson, sister: Delores Hawley and brother-in-law: Calvin Hawley, sister-in-law: Betty Johnson father-in-law: Jack Weiss, and mother-in-law: Betty Weiss Ellis. Cal served in the United States Navy and was stationed on the USS Basilone. He was the owner and operator of Cal Johnson Heating and Cooling, where he serviced many customers over 50 plus years. He enjoyed shooting sport clays with his coffee shop buddies and he enjoyed riding in his truck. Most of all, Cal loved spending time with his family, grandchildren, and friends. A Private Family Service will be held at a later date with burial to follow at Hillcrest Memorial Park in Centralia. In lieu of flowers, memorial donations may be made to the donor’s choice and will be accepted at the Sutherland-Garnier Funeral Home at 235 North Sycamore Street Centralia, Illinois 62801, (618)532-3523, who is honored to be of service to the Johnson Family. Online condolences may be made to the family by visiting www.sutherlandfuneralhome.com and the Sutherland-Garnier Funeral Home Facebook Page.

The family of Calvin Johnson created this Life Tributes page to make it easy to share your memories.

Send flowers to the Johnson family.