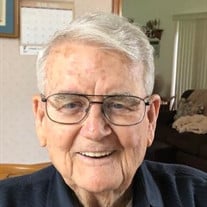 Bobby "Bob" Dean Johnson, 92, of Centralia, passed away on Saturday, June 12, 2021. He was born May 27, 1929 in Centralia, the son of Frances (Maroon) Johnson and Sylvester Johnson. He married Betty L. Hofstetter on April 2, 1949 and she preceded him in death on April 16, 2017 after 68 years of marriage. Bob was a man of God who instilled in his children and grandchildren that the ultimate reward was to make it to Heaven. He will be remembered for the many stories he shared with them. Bob was famous for his ability to grow anything in his garden. He cherished his family and worked hard his entire life to take care of them. He also loved to hunt and spent most of his time outdoors. He was very soft hearted and didn't know a stranger. He worked for Illinois Central Railroad and Centralia Cartage for many years. Bob is survived by his children: Bruce Johnson and wife Marsha, Jane Krutsinger and husband Doug, Janis Ferrari and husband Carl, and Bobby Johnson and wife Stacey. Grandchildren: Beth Boeker, Jennifer Cain, Kim Hart, Jill Schilling, Mason Bonner and Ashton Payne. Great-grandchildren: Jack Boeker, Julie Berry, Jered, Jaelyn and Jesse Cain, Elizabeth, Emily and Elaina Hart, Karlie and Kate Schilling, Rylee McIntosh, Brantlee and Penelope Payne. Brothers: Donnie Johnson and wife Becky and Val Johnson and wife Jackie. Several nieces and nephews. He was preceded in death by his parents, wife, grandson: Robert "Robb" Johnson, brothers: Jack Johnson and Calvin Johnson, and sister: Delores Hawley. Funeral Services for Bobby "Bob" Dean Johnson will be held Wednesday, June 16, 2021 at 12:00 PM at the Sutherland-Garnier Funeral Home in Centralia with Pastor Val Johnson and Pastor Ben Weeks officiating. Burial will follow at Hillcrest Memorial Park in Centralia. Friends may call Wednesday from 10:00 AM until the time of service at the funeral home. In lieu of flowers, memorial donations may be made to the Donor's choice and will be accepted at the Sutherland-Garnier Funeral Home at 235 North Sycamore Street Centralia, Illinois 62801, (618)532-3523, who is honored to be of service to the Johnson Family. Online condolences may be made to the family by visiting www.sutherlandfuneralhome.com and the Sutherland-Garnier Funeral Home Facebook Page.

The family of Bobby "Bob" Dean Johnson created this Life Tributes page to make it easy to share your memories.

Bobby &quot;Bob&quot; Dean Johnson, 92, of Centralia, passed away on Saturday,...

Send flowers to the Johnson family.