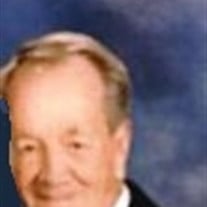 Bobbie "Bob" D. Stonecipher, 96, of Centralia, passed away on Thursday, October 14, 2021 at home. Bob was born on April 2, 1925 in Centralia, Illinois, the son of Glen and Olive (Edwards) Stonecipher. He married Evelyn Lynn Stonecipher on June 1, 1948 and she preceded him in death on December 16, 2020 after 72 years of marriage. Bob is survived by a son: Brad Stonecipher and wife Susan of Wildwood, Missouri; a daughter: Connie Hensley of Centralia; three grandsons: Blake Stonecipher of Brentwood, Missouri and, Will Stonecipher of Webster Groves, Missouri and Jason Hensley of Centralia; a brother-in-law: Jack Benefiel and wife Pat of Bethalto and a sister-in-law: Erika Benefiel of Orlando, Florida; and several nieces and nephews. Bob was preceded in death by his wife: Evelyn Lynn Stonecipher; parents: Glen and Olive Stonecipher, and a brother: Bill Stonecipher Bob was a member of the First Baptist Church in Centralia. He worked for Sears in Centralia as a sales manager for over 39 years. In his younger years, Bob enjoyed being an outdoorsman, especially hunting and fishing. He was also known for being very active and involved in his children and grandchildren's sporting events. Funeral Services for Bobbie "Bob" D. Stonecipher will be held Wednesday, October 20, 2021 at 11:00 a.m. at the Sutherland-Garnier Funeral Home in Centralia with Pastor Rodger Randolph officiating. Burial will follow at Hillcrest Memorial Park in Centralia. A visitation for family and friends will be held Wednesday, October 20, 2021 from 10:00 a.m. to the time of service at the Funeral Home with Masonic Services. In Honor of Bob, memorial donations may be made to the First Baptist Church and will be accepted at the Sutherland-Garnier Funeral Home and Cremation Services at 235 North Sycamore Street Centralia, Illinois 62801, (618)532-3523, who is honored to be of service to the Stonecipher Family. Online condolences may be made to the family by visiting www.sutherlandfuneralhome.com or the Sutherland-Garnier Funeral Home Facebook Page.

Bobbie "Bob" D. Stonecipher, 96, of Centralia, passed away on Thursday, October 14, 2021 at home. Bob was born on April 2, 1925 in Centralia, Illinois, the son of Glen and Olive (Edwards) Stonecipher. He married Evelyn Lynn Stonecipher on June... View Obituary & Service Information

The family of Bobbie "Bob" Stonecipher created this Life Tributes page to make it easy to share your memories.

Bobbie &quot;Bob&quot; D. Stonecipher, 96, of Centralia, passed away on...

Send flowers to the Stonecipher family.