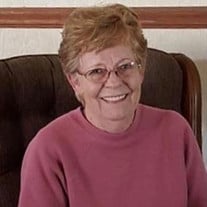 Beverly Tolley, 80, of Mt. Vernon, passed away Wednesday, January 5, 2022 at her home. She was born October 27, 1941 in rural Salem at the family home, the daughter of Raymond “Red” Ray and Mable (Friesner) Ray. She married David Tolley on October 3, 1989 and he preceded her in death on December 16, 1997. Beverly is survived by two siblings: Raymond Ray and wife Dody of Centralia and Janet Holland and husband Harvey of rural Carlyle; a step-daughter: Mikah Cooper of Sesser; three step-grandchildren: Gerrod Tolley, Shalynn Tolley, and Alexander Cooper; five nieces and nephew: Chantal, Shelley, April, Michael, and Heidi; several great-nieces and nephews. She was preceded in death by her parents: Raymond “Red” and Mable Ray, husband: David Tolley, and her grandparents: Halla & Lula Ray and Jess and Eudora Friesner. Beverly was a graduate of the Centralia High School Class of 1959. She worked in the Billing Department at SSM Health Good Samaritan Hospital for many years. She enjoyed going on the Shirlee Shuttles to Branson, Missouri. Beverly was an avid St. Louis Cardinal's Fan. She cherished the time she spent with her family, her fur baby: Jimmie, and friends. A Private Family Service for Beverly Tolley will be held at a later date with burial to follow at Hillcrest Memorial Park in Centralia. In lieu of flowers, memorial donations may be made to the donor’s choice and will be accepted at the Sutherland-Garnier Funeral Home at 235 North Sycamore Street Centralia, Illinois 62801, (618)532-3523, who is honored to be of service to the Tolley Family. Online condolences may be made to the family by visiting www.sutherlandfuneralhome.com and the Sutherland-Garnier Funeral Home Facebook Page.

The family of Beverly Tolley created this Life Tributes page to make it easy to share your memories.

Send flowers to the Tolley family.