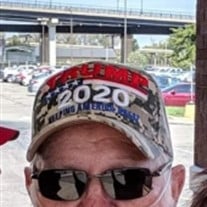 Benjamin Robert Kennedy, 69, of Centralia, passed away Wednesday, May 19, 2021 at his home. He was born January 17, 1952 in Monticello, Kentucky, the son of Robert Kennedy and Gladys (Franklin) Kennedy Robinson. Benjamin married Ruth Oestreich on March 12, 1977 and she survives in Centralia. In addition to his wife of 44 years, Ruth Kennedy of Centralia, he is also survived by his four children: Bobby Kennedy of Colorado, Joshua Kennedy and wife Tasha of Centralia, Joseph Kennedy of Centralia, and Rachel Kennedy of Centralia; three grandchildren: Hannah, Conner, and Chase; four brothers and two sisters: Paul Kennedy of Beardstown, John Kennedy and wife Brenda of Rushville, Sharon Steininger and husband Jim of Jacksonville, Christine Bacon and husband Ed of Beardstown, Frank Kennedy and wife Patti of Ramsey, and Kevin Kennedy and wife Margaret of Jacksonville; several nieces, nephews and cousins. Benjamin was preceded in death by his parents, a brother: David Kennedy, and a sister: Cathy Derry. Benjamin served in the U.S. Army in Germany during the Vietnam War. He enjoyed farming, hunting, fishing and boating on the pontoon boat. Benjamin also enjoyed doing odd jobs, taking care of his rental properties and traveling with his wife, Ruth. He was a member of the Greenview Christian Church in Centralia and the V.F.W. Post 9233 in Mt. Vernon. Funeral Services for Benjamin Kennedy will be held Saturday, May 22, 2021 at 1:00 PM at the Greenview Christian Church in Centralia with Pastor Wesley Miller officiating. Visitation will be held Saturday, May 22, 2021 from 11:00 AM to 1:00 PM at the church. Burial will follow at Hillcrest Memorial Park in Centralia with Military Honors accorded by the Centralia American Legion Post 446 and the Centralia V.F.W. Post 2055. Memorial donations may be to the V.F.W. Post 9233 in Mt. Vernon and will be accepted at the Sutherland-Garnier Funeral Home and Cremation Services at 235 North Sycamore Street Centralia, Illinois 62801, (618)532-3532, who is honored to be of service to the Kennedy Family. Online condolences may be made to the family by visiting www.sutherlandfuneralhome.com and the Sutherland-Garnier Funeral Home Facebook Page.

The family of Benjamin Kennedy created this Life Tributes page to make it easy to share your memories.

Send flowers to the Kennedy family.