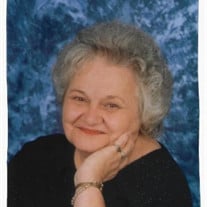 Ann (Bierman) Chappell, 81, of Centralia, passed away, Thursday, July 23, 2020. Ann was born October 7, 1938 in Centralia, daughter of Harry and Edna (Revelle) Bierman. She married Gerald (Jerry) Chappell on February 6, 1955. In addition to her husband of 66 years, she is survived by three sons, Gene Chappell and wife Judy, Tony Chappell, and Brad Chappell, and a daughter Sharri and husband Neil Davies; Ten grandchildren, Ian Aaron, Amy and Bailey Chappell, Shannon Zelasko, Nathan, Noah and wife Maggie, Nikolas Grimes, Kayleigh Davies and Logan Davies; One great-grandson, Gavin Grimes and one great-granddaughter Amara Grimes; One sister, Paula French, of Austin, Texas; and one brother-in-law and four sisters-in-law-Rosie Deadmond and Betty, Tom, Cathy, and Lillian Chappell; Fifteen nephews and nineteen nieces (three special nieces Lynn, Judy, and Marilyn); plus six special friends Michele, Jerri, Crystal, Margaret, Lola and Bev. She was preceded in death by her parents, Harry and Edna Bierman; father and mother-in-law, Raymond and Goldie Chappell; daughter-in-law, Carolyn Chappell; two brothers, Lowell Dwane and Alden (Slim) Bierman; and one sister Carole Norred; Ten sisters-in-law, Maxcene and Mary Vellers, Oeta Jourdan, Laverne Lender Wallar, Lillian Wise, Doris Wiedle, Eloise Alstat Purcell, Sue Ward, Margaret Chappell, and Pat Bierman; Fifteen brothers-in-law, Wilvy and Pete Veller, Ben Jourdan, Herb Wallar, L.E Wise, LaVerne Wiedle,Wally Alstat, Warren Purcell, Dean Deadmond, Rayme, Jim, and Don Chappell, and Bob Ward, Albert French, and George Norred. Ann attended Schiller School and Centralia Township High School. She worked at Bert and Lela’s Lunchette for five years, Rebans/Hasses Drive Inn for twelve years, Kroger’s for two years, was manager of the Lunch department of SS Kresge’s and Kmart for twelve years. She sold Tupperware for Trio Sales for 18 years and also owned “Cakes by Ann” for 30 years until retiring in 2001. Ann lived in Centralia all but one year of her life. In 1956 she and Jerry lived in Washington DC where Jerry was stationed at Andrews AFB. They continued to get together many years afterwards with friends they met while there and even today still stay in touch enjoying the bond that was formed in 1956. Ann was a devoted mother and grandmother, always putting the family first. When her children were young, she was a Girl Scout leader at Trinity Lutheran, a member of the Trinity PTL, Room Mother Chairman, attended most of her children’s sports activities at the school and the Rec Center. Most evenings found Ann with the family station wagon full of kids heading to a game. “Mrs. C”, as she was called, was involved with her children and their friends, a legacy she has continued with her grandchildren. Dear to her heart was working on the family tree, finding where her roots began and how the family came to Centralia from Scotland, Ireland, England and Germany. Ann and Jerry loved to travel and visited all fifty states before traveling abroad. In the 60’s, 70’s, and 80’s, the children went on most of these trips and they continued the tradition with their grandchildren. Ann served in many organizations, most supporting the local community: Member of Trinity Lutheran Church where she was a greeter, Chairman of the Condolence Committee, past President of the Ladies Aid, past President pf the Friendship Guild, past President-Vice President-Treasurer of the Trinity Couples Club, Vice President and Treasurer of Trinity Spirited Seniors, and a member of the Wednesday night Bible class; a member of Chapter 1525 AARP, serving as President, Vice President, Secretary, and assistant Treasurer; member of Centralia’s BPW for over 30 years, serving as Chairman of BPW Week and serving on several other committees (was 1998 BPW Women of the Year); member of the Centralia Woman’s Club, serving as President and Vice President before transferring to the Sandoval Women’s Club; served as Oracle of Royal Neighbors of Walnut Hill; member of East Centralia Home and Community Education organization until it disbanded and then joined Greenbriar serving as treasurer of both; was a charter member of NARFE where she served as Secretary; member of Irvington Friendship club serving as their Vice President. Other memberships were in Fifty Plus Club of Demaree Methodist Church, Ladies of the Moose, and Church Women United; worked on all CTHS “Class of 56” reunions. Ann won many awards for her community service. Local and US history and genealogy were passions for Ann. She was a Life Member of the Centralia Area Historical Society and the Monroe County Historical Society and she served as past President of both the Marion County and the Clinton County Historical Societies. Ann was also a member of Daughters of Union Veterans of the Civil War, the Washington County Historical Society, and was Regent, Vice-Regent, and Secretary of the Prairie State Chapter of the Daughters of the American Revolution. Ann served on the Elmwood Cemetery Committee and was appointed a Commissioner by the City Manager. Ann and husband Jerry worked as a team to save the “Little Chapel” in the cemetery in 1996. The chapel was 105 years old in October 2019. Ann served on the Centralia Veterans’ Committee as well. The members of Prairie State DAR, led by Ann, saw that there was an American flag on each veteran’s grave in Elmwood for Memorial Day. They also undertook placing flags (500 of them) along all the main streets of Centralia. This was accomplished in less than a year. Funeral Services for Ann Chappell will be held Wednesday, July 29, 2020 at 11:00 AM at the Trinity Lutheran Church in Centralia with Pastor Miguel Torneire officiating. Burial will follow at Hillcrest Memorial Park in Centralia. Due to the current pandemic, Masks will be mandatory and social distancing will be observed at the church. Visitation will be held Wednesday morning from 9:00 AM to 11:00 AM at the church. Memorial donations may be to Trinity Lutheran, Prairie State DAR, and Flags for Centralia and will be accepted at Sutherland Garnier Funeral Home at 235 North Sycamore Street Centralia, Illinois 62801, (618)532-3523, who is honored to be of service to the Chappell family. Online condolences may be made to the family by visiting: www.sutherlandfuneralhome.com

The family of Ann Chappell created this Life Tributes page to make it easy to share your memories.

Send flowers to the Chappell family.