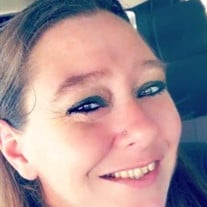 Andrea (Curtner) Carter, 39, of Sandoval, passed away Friday, January 21, 2022 at her home. She was born August 13, 1982 in Centralia, daughter of Terry Curtner and Julie (Howard) Curtner. She married Michael Carter on June 14, 2019 and he survives. In addition her parents: Terry Curtner of Altamont and Julie Curtner of Walnut Hill, and her husband: Michael Carter of Sandoval, she is also survived by her three daughters: Gabby Curtner of Sandoval, Tiffany Carter and Brandon of Centralia, and Taylor McHenry and husband Tim of Sandoval; five grandchildren: Addalynn, Rhett, Layni, Kamryn, and Russell; two brothers: Adam Curtner and wife Mamie of Walnut Hill and Josh Curtner and Sierra of Centralia; four nephews and a niece: Bobby, Kylie, Jack, Parker, and Leland; grandparents: David Howard and wife Sherry of Walnut Hill; and several aunts, uncles and cousins. She was preceded in death by her grandparents: Billie and Mary Curtner and mother-in-law: Ruth Ann Carter. Andrea worked at Warren G. Murray Center for 14 years. She enjoyed listening music, going to concerts, traveling, dancing and singing Karaoke. Andrea had a big and caring heart. Her family was a big part of her life and she loved spending time with all of them, her friends, and her fur baby, Athena. Funeral Services for Andrea Carter will be held Saturday, January 29, 2022 at 1:00 PM at the First Apostolic Church in Centralia with Pastor Jonathan Urshan officiating. Burial will follow at Hillcrest Memorial Park in Centralia. Visitation will be held Friday, January 28, 2022 from 5:00 PM to 7:00 PM at the Sutherland-Garnier Funeral Home in Centralia and also on Saturday from 11:00 AM until the time of service at the church. In lieu of flowers, memorial donations may be made to her daughter, Gabby Curtners, college fund and will be accepted at the Sutherland-Garnier Funeral Home at 235 North Sycamore Street Centralia, Illinois 62801, (618)532-3523, who is honored to be of service to the Carter Family and Curtner Family. Online condolences may be made to the family by visiting www.sutherlandfuneralhome.com and the Sutherland-Garnier Funeral Home Facebook Page.

Andrea (Curtner) Carter, 39, of Sandoval, passed away Friday, January 21, 2022 at her home. She was born August 13, 1982 in Centralia, daughter of Terry Curtner and Julie (Howard) Curtner. She married Michael Carter on June 14, 2019 and he... View Obituary & Service Information

The family of Andrea Carter created this Life Tributes page to make it easy to share your memories.

Send flowers to the Carter family.