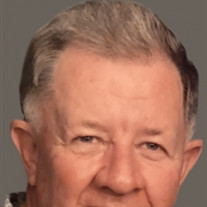 Allan Duane Brantley, age 88, of Centralia, left his earthly home on Thursday, December 31, 2020 at Fireside House in Centralia, after a lengthy illness. He was born July 13, 1932 in Centralia, the son of Charles Elmo Brantley and Virginia (Owens) Brantley. He married Frances Gaultney on March 17, 1951 and she survives in Centralia. In addition to his wife of 69 years, also left to mourn his passing are his three loving daughters: Cheryl Tabor and husband Gary, Kimberly Robinett and husband Rusty, Trina Schneider and husband Alan, and his only sibling, Patty J. Carlson all of Centralia. He is also survived by his six grandchildren: Melissa Glasgow, Lindsay Eigenrauch, Blake Robinett, Jered Schneider, Scott Schneider and C.J. Schneider. Also eleven great-grandchildren: Sage, Aidan, Brantley, Hanley, Maisy, Renley, Luna, Ada, Jude, Ruby, Henry and the 12th one due in January. He was preceded in death by his parents and a brother-in-law: Dickie Carlson. He was a life-long resident of Centralia; a graduate of Centralia Township High School Class of 1950, where he acceled in track and field. He would never miss an Orphan Basketball game or Holiday Tournament for a number of years. He attended the University of Illinois at Champaign earning his Aeronautical electronics engineering certificate in 1952. He enlisted in the U.S. Air Force, and was stationed at Barksdale AFB in Louisiana, where he was a part of the 301st bombardment unit during the height of the Korean Conflict. His unit, using the B-29 Super fortress, was one of the 1st unites to conduct aerial refueling operations with the KB-20 tanker version of the Super fortress. These aerial refuelings became the main mission of the 301st unit, which deployed to England and French Morocco in 1953. He was well known in the area as being the flagman at the Marion County Speedway on Friday nights in the 1960's. He was foreman at Wheaton Plastics in the 1970's. He retired as a Correctional Officer at the Centralia Correctional Center in 1994, where he was fondly referred to as "Dad Brantley" by his fellow officers. After retirement, he and his wife enjoyed traveling in their Motorhome, camping, boating on Kentucky Lake, spending time with all of their grandchildren and great-grandchildren. Some of his hobbies included: building and flying remote control airplanes, landscaping, and shopping a local thrift stores. He was a member of The Rock Church and attended regularly until recently. A visitation for Allan Duane Brantley will be held Wednesday, January 6, 2021 from 11:00 AM to 1:00 PM at The Rock Church in Centralia, for those in attendance please wear a mask and social distance. A Celebration of Life Service will be held Wednesday at 1:00 PM at the church with Pastor Steve Upchurch and CJ Schneider officiating. Burial will follow at Elmwood Cemetery in Centralia with Military Honors being accorded at the gravesite by the Centralia American Legion Post 446 and the Centralia VFW Post 2055. The Family has requested for Memorial Donations to be made to the Rock Church, Helping Hands Food Pantry and the Eternity Baptist Church and will be accepted at Sutherland-Garnier Funeral Home and Cremation Services at 235 North Sycamore Street in Centralia (618)532-3523 who is honored to be of service to the Brantley Family. Online condolences may be made to the family by visiting www.sutherlandfuneralhome.com and the Sutherland-Garnier Funeral Home Facebook Page.

Allan Duane Brantley, age 88, of Centralia, left his earthly home on Thursday, December 31, 2020 at Fireside House in Centralia, after a lengthy illness. He was born July 13, 1932 in Centralia, the son of Charles Elmo Brantley and Virginia... View Obituary & Service Information

The family of Allan Duane Brantley created this Life Tributes page to make it easy to share your memories.

Send flowers to the Brantley family.