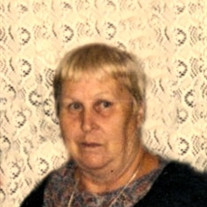 Alice A. Beasley, 87, of Iuka, Illinois passed away August 21, 2021 at Doctors Health and Rehabilitation Center in Salem. Born January 23, 1934 in Omega Twp., she was the daughter of Walter "Frank" and Mildred L. (Cheeley) Arnold. Alice grew up in the area of Omega Twp., and lived in the Iuka area most of her life. She loved all things in nature, especially her pet dogs, both watching and feeding her hummingbirds, raised a large family and had a happy spirit. She was a member of the Salem Church of God. She married William T. "Tom" Beasley, June 21, 1950 in Salem and he preceded her in death March 12, 1998. Surviving are her children, Joan Bryant of Kell, IL; Brenda Beasley - Hayes and husband Charlie of Iuka, IL; Diane Beasley - Polko and wife Lisa of Maryland; Carol Forsythe and husband Trent of Mt. Vernon, IL; Lula Blanton and husband Keith of Centralia, IL. She is also survived by her grandchildren Charles (Penny) Bryant, Landon (Ann) Beasley, Curtis (Liz) Hayes, Stacey Hayes, Kyle Beasley, Kristen (Landon) Bray, Kaitlin Beasley-Polko and Kylee Beasley-Polko; also 6 great grandchildren. She is also survived by her niece which she thought of as her daughter, Pam Devor and husband David of Kell, IL, which Alice always called, my favorite daughter. In addition to her husband and parents, she was preceded in death by sons Tom and Bill Beasley, her son-in-law Chuck Bryant, grandchildren Patrick, Adam and Billy Jack Beasley, and recently her great grandson Neal Beasley. Also her sister, Marion Chapman. Funeral services will be 1:00 pm Friday at the Sutherland-Rankin Funeral Home with burial to follow at the Harvey's Point Church Cemetery, Kell, IL. Visiting hours will be from 11:00 am until the service hour at the funeral home. Memorials may be made to St. Jude's Children's Research Hospital and will be accepted by the Sutherland - Rankin Funeral Home, P.O. Box 97, 310 N. Broadway, Salem, IL 62881 (618) 548-1234, entrusted with the family's care. On line condolences may be left at sutherlandfuneralhome.com.

Alice A. Beasley, 87, of Iuka, Illinois passed away August 21, 2021 at Doctors Health and Rehabilitation Center in Salem. Born January 23, 1934 in Omega Twp., she was the daughter of Walter "Frank" and Mildred L. (Cheeley) Arnold. Alice... View Obituary & Service Information

The family of Ms. Alice Adelia Beasley created this Life Tributes page to make it easy to share your memories.

Send flowers to the Beasley family.